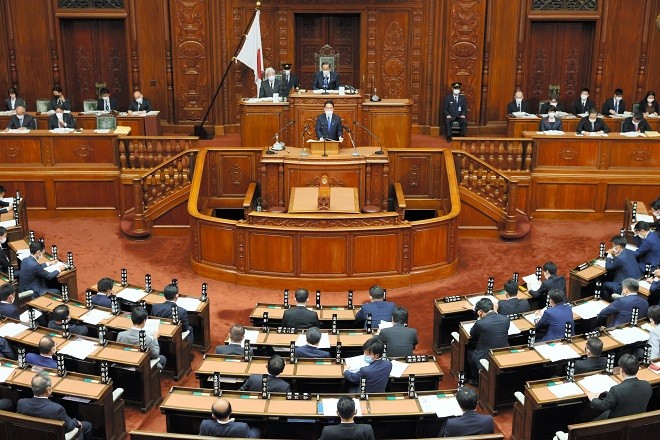 The Diet convened for an autumn extraordinary session on Oct. 3 to give lawmakers their first opportunity to engage in full-scale policy debate since the July 10 Upper House election.

In the nearly three months since the election, public support for the Kishida administration has waned, as shown by Cabinet approval ratings, due to the decision to go ahead with a state funeral for slain former Prime Minister Shinzo Abe, despite bitter public misgivings about doing so, and a string of revelations about ties between the ruling Liberal Democratic Party and the Unification Church, now formally known as the Family Federation for World Peace and Unification.

Since he took office a year ago, Kishida has talked repeatedly about “a crisis of democracy” and pledged to place the highest importance on listening to the voices of the people. He must be feeling bitterly disappointed at how things have turned out. It will be hard for him to ride out his current political predicament without reflecting on the mistakes and shortcomings that have undermined his leadership.

But Kishida’s Oct. 3 policy speech to kick off the Diet session showed no signs of his determination or readiness to deal with these problems.

At the outset of his speech, Kishida vowed to “protect Japan and open up a new future” for the nation as he expressed his intention to tackle a number of pressing policy challenges, such as curbing the current bout of inflation, rejuvenating the domestic economy and fundamentally enhancing the nation’s defense capabilities.

The fact that he devoted a section of his speech to stating his “political stance” apparently signals his awareness of the urgent need to restore public trust in his administration. But his perfunctory words are unlikely to find any resonance among the people.

Touching on the state funeral for Abe, Kishida lauded the ceremony for offering “solemn and heartfelt” moments. In his only and cursory reference to opposition to the event, he said he will “take various opinions that came from the people seriously and use them for the future.” This offers no clues as to what he thinks were problems that need to be fixed. He did not refer to his plan to set up a panel of experts to review his decision to hold the state funeral.

With regard to the LDP’s ties with the Unification Church, Kishida said he will make efforts to “regain public trust while fulfilling his responsibility to explain.” Specifically, he said he will consider revising the law concerning consumer contracts, among other steps.

The government has, of course, a duty to make every effort to provide relief to victims of the church’s shady activities. But Kishida does not seem to be deeply committed to clarifying the relationship between politicians and the controversial religious group. One indication of his reluctance to get to the bottom of this problem is that the original draft of his speech referred to the church only as an “organization with problems that have been socially pointed out” without naming the group. This part was hastily changed in the morning, but nevertheless exposed the administration’s weak-kneed stance toward the matter.

In connection with the Cultural Affairs Agency’s decision to allow the church to change its name when Abe held office, the government may retract a plan to introduce legislation related to the education ministry, which supervises the agency, to minimize opportunities for opposition parties to ask questions about this issue at related Upper and Lower House committees. This is a disturbing attempt to hamper efforts to uncover the truth.

Kishida also said his “willingness to pay attention to harsh opinions” is his “starting point” and “original mindset” as a politician. Whether he is speaking from the heart or not will be made clear by his remarks during the Diet session and his administration’s responses to key issues. He cannot hope to regain public trust if his commitment to his basic creed is called into doubt.