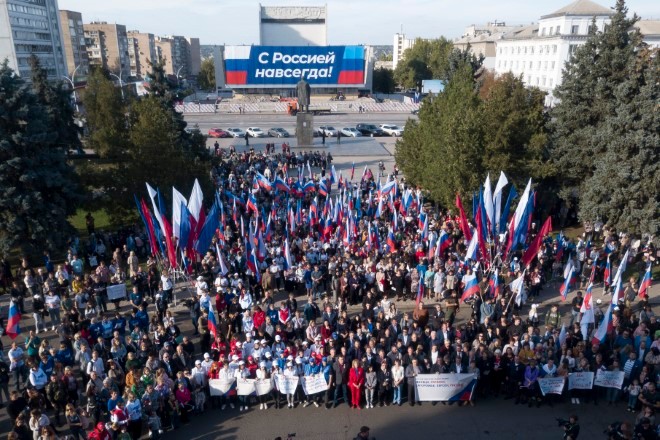 People gather during celebrations marking the incorporation of the Luhansk region into Russia in Luhansk, Ukraine, Sept. 30, 2022. The signing of the treaties making the four regions part of Russia follows the completion of the Kremlin-orchestrated ‘referendums.’ The banner in the background reads: ‘With Russia forever!’ (AP Photo)

State media KCNA reported on a U.S.-led U.N. Security Council resolution condemning the proclaimed annexation, which was vetoed on Friday by Russia, backing Moscow’s claim that the regions chose to be part of Russia.

Kyiv and Western leaders condemned the referendums as a sham, with Washington urging U.N. member states not to recognize any altered status of Ukraine, and Russia to withdraw its troops from the regions where it has seized territory by force and fighting still rages.

Jo Chol Su, director-general of international organizations at Pyongyang’s Foreign Ministry, said the referendums were held legitimately in line with the U.N. charter, but the United States was holding “gangster-like double standards” after having invaded other countries to maintain its own “supremacy.”

“To maintain the unchallenged ‘unipolar world’, the U.S. interferes in the internal affairs of independent countries and infringes upon their legal rights by abusing the UNSC,” Jo said in a statement carried by KCNA.

“The U.S. unleashed wars of aggression against sovereign states including former Yugoslavia, Afghanistan and Iraq, but the U.S. has not been called into question by the UNSC.”

Jo said the Security Council would face consequences if it follows Washington’s “highhanded and arbitrary practices and partial and double-standards acts.”

The United States said last month that Russia was in the buying millions of rockets and artillery shells from North Korea for use in Ukraine.