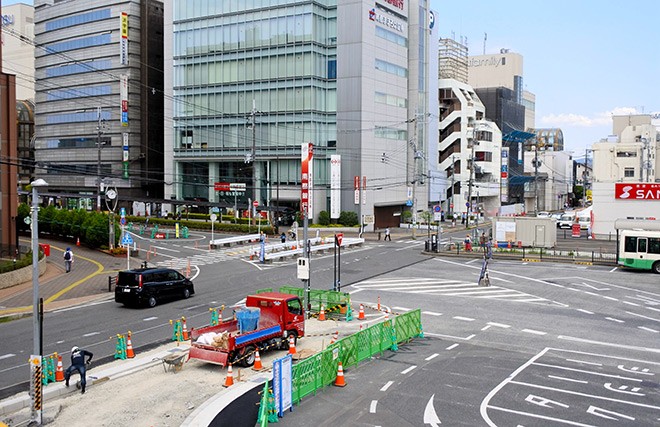 Former Prime Minister Shinzo Abe was gunned down at the spot shown in the center of this photo taken July 25. It falls in an area where work is proceeding to reconstruct a road north of Kintetsu Railway’s Yamato-Saidaiji Station in Nara city. (Makoto Ito)

NARA--No memorial will be erected to mark the spot where former Prime Minister Shinzo Abe was shot to death while campaigning here in July for the Upper House election.

Instead, the city government intends to go ahead with an existing plan to redevelop the area, citing safety reasons.

Abe was shot July 8 by a lone gunman while making a campaign speech on behalf of a candidate of the ruling Liberal Democratic Party in an area cordoned off by guardrails at a T-junction just north of the Kintetsu Railway’s Yamato-Saidaiji Station in Nara city.

He was pronounced dead in hospital.

The site is in an area that was already slated for redevelopment in March.

After the shooting, Nakagawa said he was considering how to proceed.

According to city government sources, three options were on table: creating a green space at the center of road reconstruction work, which includes the site where Abe was gunned down, expanding an existing pedestrian road and erecting a memorial, or proceeding with the redevelopment plan without putting up a memorial.

City officials consulted other public authorities, including the police, educational and welfare bodies for ideas.

“We don’t need any monument” or “The safety of pedestrians and cars is of primary importance” constituted the overriding sentiment, city officials said.

The central government held a state funeral in Tokyo for Abe, the nation’s longest-serving prime minister, on Sept. 27.