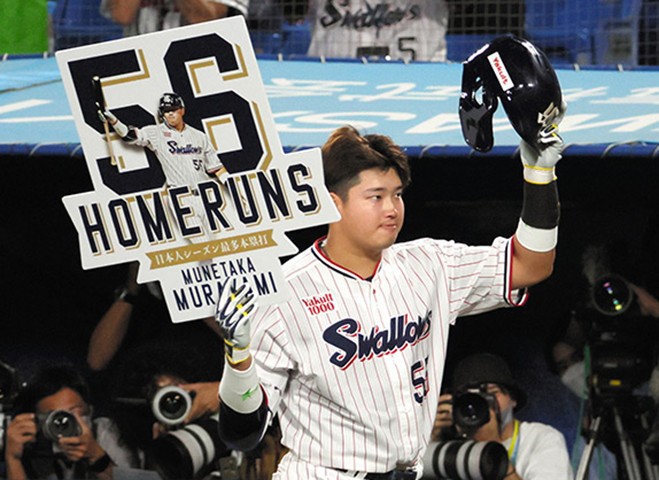 Like all superstars, Munetaka Murakami of the Tokyo Yakult Swallows saved his best work for last.

With one mighty swing in his final at-bat of the regular season, he passed legendary Yomiuri Giants slugger Sadaharu Oh in the record books.

On Oct. 3, Murakami, a.k.a. "MuraGod," clubbed his 56th home run of the season, the Nippon Professional Baseball record for a Japanese-born player.

But even a "god" can fall into a slump.

He maintained his hold on the triple crown (tops in home runs, RBIs and batting average), leaving the rest of his rivals far behind in RBIs and home runs.

But his batting average dropped sharply during the 13-game slump.

Swallows’ skipper Shingo Takatsu thought it was time to give the slugger a rest, deciding to pull Murakami from the lineup for the Oct. 2 game against the Hanshin Tigers.

Murakami stayed positive, saying, “It is difficult to become the number one in anything.”

He said he reassessed the way he uses his legs and hips at the plate.

It was his last at-bat of the regular season when he finally snapped his long home run drought.

In the bottom of the seventh inning against the Yokohama DeNA Baystars with no outs, Murakami sent the first pitch soaring high into the night sky, landing in the upper right field stands.

Murakami knew it was gone the instant he hit it, turning to the Swallows’ bench and waving his clenched fists in triumph.

He was smiling, looked relieved to have finally broken Oh's more than half-a-century mark.

Then Murakami trotted to first base, as the packed stands gave him a rousing standing ovation.

Murakami said, “It has been a while” to feel the satisfying impact of a home run.

“Ah, this feeling. It feels good,” he said he thought at the time.

About making history in his final at-bat, Murakami said, “It surprised me, too.”

“It was a reward at the last second,” he said.

Takatsu agreed that the ending was overly dramatic.

“This is not something you would see even in a manga script,” the manager said. “It just symbolized the Mune of this season."

RIGHT PLACE AT THE RIGHT TIME

Many fans in the bleacher sections of Meiji Jingu Stadium in Tokyo hoped to snag the historic home run ball.

But lady luck smiled on a hungry junior high student who had his eye on a serving of sweet and sour Chinese fried chicken.

Sota Sakurai, 14, has been an avid Swallows fan for six years and often comes to the stadium.

He was watching the Oct. 3 game from an infield seat.

But Sota was hungry and craved a special fried chicken dish named for Swallows’ infielder Hiyu Motoyama, so he walked all the way to the outfield area to find a food vendor selling the dish.

But then he noticed it was Murakami’s time at bat, so he went to a bleacher section from the concourse.

“The ball just came flying toward me, and I was able to catch it,” the youngster said.

He told reporters it was completely unexpected for him to be the lucky one and stand in the spotlight.

He said he gave the ball to Murakami through the team staff, and, in return, he received a pair of leather batting gloves autographed by the new Japanese home run king.

“I will put them on display in my room,” Sota said.

Along with the record-breaking home run ball, Murakami also took home the triple crown, with 56 home runs, a .318 batting average and 134 RBIs.

He became the youngest player to do so.

He was the eighth player in NPB history to achieve the feat and the first to do so in 18 years.