VOX POPULI: Nobel winner showed how we are all related through genetics 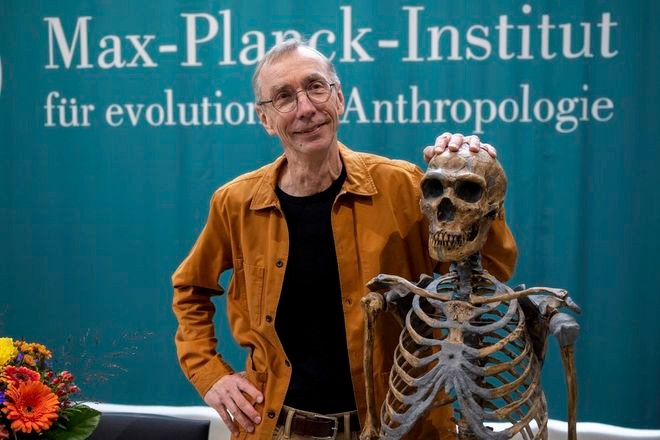 Swedish scientist Svante Paabo stands by a replica of a Neanderthal skeleton at the Max Planck Institute for Evolutionary Anthropology in Leipzig, Germany, on Oct. 3. (dpa via AP)

I learned from “The Seven Daughters of Eve: The Science That Reveals Our Genetic Ancestry,” by British geneticist Bryan Sykes (1947-2020), that almost all Europeans today can trace their ancestry to just seven “mothers,” whose given names include Helena and Velda.

I also understand that a similar pattern exists around the world, and that the “mothers” of east Eurasians are named Emiko and Yumi, among others.

Tracing our ancestry from our parents to grandparents and further back, where do we end? The question of who we are is an eternal question for us humans.

The Old Testament of the Bible provides the answer of Adam and Eve. But in our day and age, religion has been replaced by genetics in our quest for the truth.

Humans originated on the African continent and spread, over the eons, to as far as remote islands in the Pacific Ocean. Along the way, humans encountered Neanderthals.

Swedish scientist Svante Paabo, the recipient of this year’s Nobel Prize in Physiology or Medicine, departed from conventional theories and concluded from his DNA analyses that our ancestors had mated with the Neanderthals.

In other words, Paabo discovered that some of the genes carried by Europeans and Asians living today were inherited from the Neanderthals.

Paabo once stated to the effect that the Neanderthal is lurking in many of us.

How fascinating that a “trace” of humanity’s epic journey has been etched into me, who is just one insignificant member of the human race.

Around the world, discrimination and exclusionism based on racial differences still run rampant. Modern genetics, however, teach us the utter meaninglessness of racial categorization.

In the long history of humans, we have all intermingled and become related.