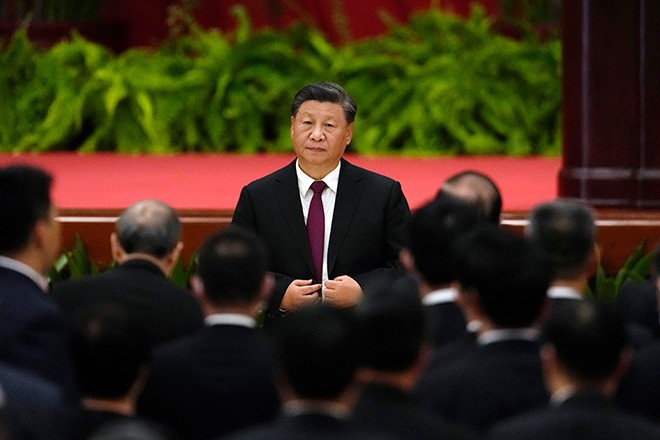 Chinese President Xi Jinping prepares to attend a dinner reception at the Great Hall of the People in Beijing on Sept. 30. (AP Photo)

BEIJING--Chinese President Xi Jinping is poised to secure an historic third term as general secretary of the Chinese Communist Party, breaking with a decades-long practice regarding the party leadership.

According to a party insider, the proposed party leadership lineup was submitted at the Sept. 9 meeting of the Central Committee Politburo and Xi’s name was at the top.

This year’s Communist Party National Congress convenes from Oct. 16. About 200 members of the Central Committee will first be selected. Those members in turn will select the general secretary and other top party posts, but a party source said the September personnel proposal would not likely be overturned.

According to another party source, Xi also serves as the head of the group putting together the draft of the speech to be given at the National Congress. Traditional practice has been for the next leader to hold the top post of the drafting group.

There is an unwritten party rule that those aged 68 or older at the time of a National Congress have to retire from their high-level party posts. But while Xi is already 69, that rule will not apply to him.

In fact, Chinese media since late last year has been referring to Xi by the title of “great helmsman,” a monicker used in the past for Mao Zedong.

There is a possibility that Xi’s new title could be formalized in party regulations. At the same time, it now appears unlikely that Xi will take on the title of party “chairman” that was also used by Mao to remain in power for life.

The cult of personality that emerged around Mao and led to devastating consequences that culminated in the Cultural Revolution was a major reason a collective party leadership structure was established in the 1980s by Deng Xiaoping.

But Xi set in motion a plan to remain in power longer than past leaders by doing away with the term limitation for president in 2018. He has also concentrated greater authority on grounds the world is now facing a major turning point experienced once a century.

Under the provisions of the Chinese Constitution, Premier Li Keqiang will be replaced in March 2023. The leading candidate to replace him is Wang Yang, 67, chairman of the Chinese People’s Political Consultative Conference, and fourth in the party hierarchy.

Another possible candidate is Hu Chunhua, 59, a vice premier.

Both Xi and his predecessor, Hu Jintao, were among the top leadership group more than five years before they reached the top.

But there is little likelihood that a successor to Xi will be chosen in the next personnel change, so he could remain in power for a fourth term in 2027.