Unification Church pledges to clean up its act on donations 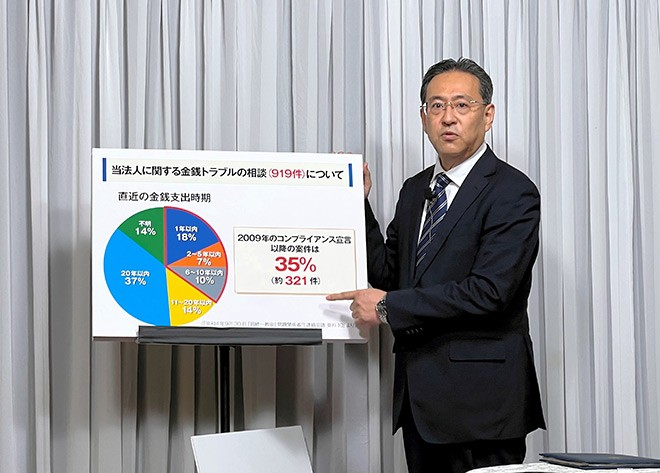 Hideyuki Teshigawara, a top official of the Unification Church, explains the organization’s reform plan on Oct. 4 in Tokyo. (Nobuaki Tanaka)

The Unification Church announced it will reform its system of accepting donations to ensure followers do not give away "excessive" sums.

It also pledged to regularly check donations and make a record when a follower donates more than 30 percent of his or her income.

The church, which is reeling from criticism of its practices following the slaying in July of former Prime Minister Shinzo Abe, announced the measures during an Oct. 4 news conference held at its facility in Tokyo’s Shibuya Ward.

Hideyuki Teshigawara, a top official of the church now formally called the Family Federation for World Peace and Unification, said a receipt will be issued when a follower donates more than three-tenths of his or her self-reported monthly income.

Receipts will be issued after recording the amount of monthly income and checking whether or not the follower’s family agrees to the donation, he said.

The church will scrutinize the receipts regularly, he said.

Teshigawara said the church will also conduct a survey on its followers every six months, done with complete anonimity.

A panel of experts set up by the Consumer Affairs Agency met the same day to discuss cracking down on excessive donations to religious groups.

“We will comply with whatever the government decides,” Teshigawara said.

However, he declined to comment on a proposal for donations to be checked by a third party.

“First of all, the church needs to hold an in-house investigation into its past excesses with regard to donations and then apologize to victims and compensate them,” said Yasuo Kawai, a lawyer with the National Network of Lawyers Against Spiritual Sales. “Without a supervisory framework by a third party, the effectiveness of the church’s reform plan is open to question.”