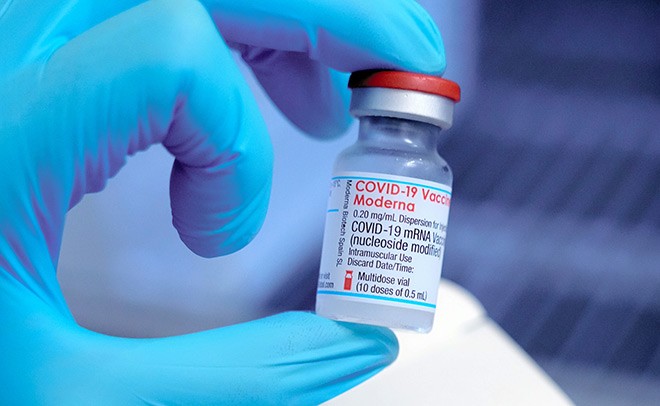 As Japan rolls out the latest COVID-19 shots designed to target the Omicron variant, some 2 million doses of standard coronavirus vaccines in stock are at risk of being scrapped.

The Asahi Shimbun surveyed prefectural governments and cities with large populations and found that about 2.2 million doses of conventional vaccines were in stock as of late September.

These vaccines are supposed to be administered to people who will be inoculated for the first or second time against COVID-19.

But bookings for inoculations are dwindling as Japan runs out of people willing to get their first round of shots and expiration dates are approaching, so much of the stock is expected to go unused.

“It is difficult to make an accurate estimate of future needs in a round of purchasing,” a health ministry official said. “Discarding conventional vaccines is unavoidable to some extent, as inoculations with new vaccines targeting the Omicron variant are carried out.”

The Asahi Shimbun asked all Japan’s 47 prefectures and 20 cities with populations over 500,000 about how many vaccines they have stockpiled and how many they expect to discard.

Many prefectural governments did not know the quantity of stock after the vaccines were shipped out to municipalities.

Miyagi Prefecture estimates it had about 500,000 doses of Pfizer and Moderna vaccines as of Sept. 26, including ones stocked by municipalities.

But representative of the Miyagi prefectural government said they expect most of the stocked vaccines will eventually have to be discarded.

“Only about 1,000 (inoculation) appointments per month have been made for the first or second shots,” the official said.

The Yamagata prefectural government did not know how many vaccines are in stock. But the governments of five populous cities--Yamagata, Tsuruoka, Sakata, Tendo and Yonezawa--had about 89,000 doses. About 74,000 of those are expected to be discarded.

Many of these vaccines are Moderna vaccines with looming expiration dates.

The Shimane Prefectural government stocked about 150,000 doses as of late September, and about 140,000 of these will have to be discarded.

The city government of Kita-Kyushu said almost all its 40,000 doses will be discarded.

“The central government initially said the rollout of the vaccines targeting the Omicron variant would start in mid-October,” a Kita-Kyushu official said. “But because it was moved up by about three weeks, many conventional vaccines have gone unused.”

Some municipalities have avoided waste by prioritizing vaccine doses based on their expiration dates.

The Kanagawa prefectural government developed its own system to make it easier for municipalities to share vaccines with each other by having them register the number of unused doses as of fiscal 2021.

Many other municipalities have taken similar approaches and are trying to encourage a broader uptake.

The Yamanashi prefectural government opened additional large-scale vaccination sites on weekends until Sept. 25 where people could receive a shot without booking an appointment. The idea was to encourage more people to get their first or second shots.

The Oita prefectural government distributed the supply of unused vaccines among municipalities in May.

But a prefectural government official said the number of people willing to be vaccinated may be reaching its peak.

“People who have yet to receive a shot at this point are believed to be those who are determined not to receive one. So, it is difficult.”

The Ehime prefectural government said it “asked the central government through the National Governors’ Association to collect the unused vaccines and provide them to foreign countries.”

All the vaccines the central government purchased from AstraZeneca have passed their expiration date of six months by the end of September, ending the inoculation of AstraZeneca vaccines.

The health ministry said of the 120 million doses of AstraZeneca vaccines that the central government purchased, about 13.5 million doses were discarded.

According to data collected by the Finance Ministry, as of April, the central government spent 2.4 trillion yen ($16.6 billion) for 882 million doses of vaccines, or 2,700 yen per dose.

The Finance Ministry had pointed out that the central government should analyze the cost versus the benefits of purchasing vaccines well in excess of what was required to cover the entire population.