Sony to begin sales of machine that could help detect dementia 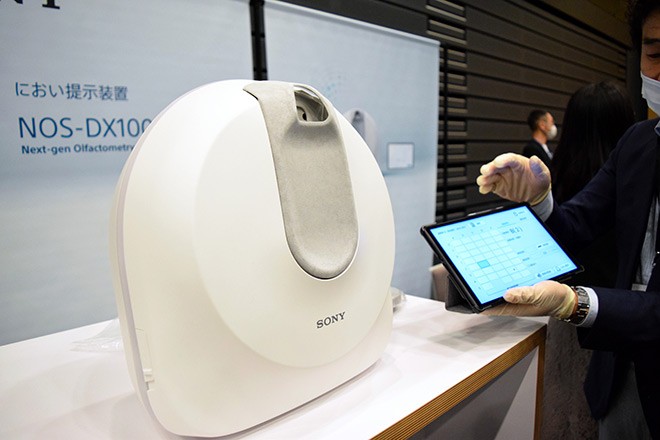 Sony Corp. developed a device that measures a person’s sense of smell. People put their noses into the hole and smell 40 odors. (Kenji Izawa)

Sony Corp. will begin selling a device to medical institutions in spring next year that can measure one’s sense of smell and could help detect dementia early on, the electronics giant announced Oct. 5.

A person’s sense of smell is believed to decline in the early stages of dementia.

The device measures about 40 centimeters in length and width.

It emits five types of odors such as a flower, fruit and the smell of something rotting. By changing the strength of these emissions, the equipment can produce a total of 40 odors.

People sniff these odors, and their sense of smell is measured. They can check the result using a dedicated application.

The cartridge containing the source of the odor is airtight to prevent any leakage. The device also has a deodorizing function, allowing the operator to try various smells one after another.

Olfactory measurement is usually done by soaking a paper with a liquid that gives off an odor and sniffing it in order of weakest to strongest. This, however, takes time and a lot of work.

The test must also be adjusted to the air conditioning so that multiple odors do not mix.

Sony said the new device can shorten the measurement time to one-third from the current standard of around 30 minutes.

Sony is also considering applying the device to the entertainment business, with a virtual “metaverse” space strongly in mind.

“We aim to create new expressions and experiences (using this technology) in the entertainment field as well in the future,” said Osamu Hajimoto, deputy president of the company's New Business and Technology Development Group, at a news conference on Oct. 5.