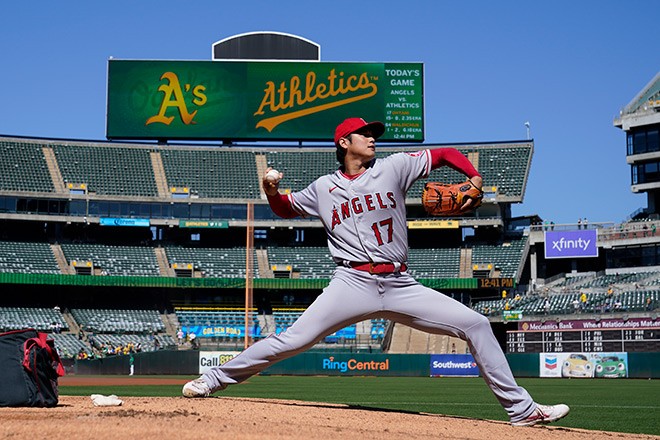 Los Angeles Angels pitcher Shohei Ohtani warms up before a game against the Oakland Athletics in Oakland, California, on Oct. 5. (AP Photo)

Yoshiharu Habu, a 9-dan shogi player, once had a nightmare about a match.

Certain of his victory, he inadvertently made the illegal move of “nifu” by dropping a pawn, or “fu,” to a file where another pawn of his was already in place.

He awoke with a start, realizing his mistake. It was on the morning of a match.

Habu recalled this experience at an event 20 years ago, according to his book “Shogi Kara Manande Kitakoto” (What I learned from shogi).

In the ruthlessly competitive world of professional shogi, players must outperform a myriad of rivals by striving to remain in top form and keep producing results. If they cannot, they are shoved off center stage.

For 27 years since becoming a champion at age 20, Habu consistently managed to retain at least one of the major titles of shogi.

The need to live up to rigorous discipline is not unique to shogi players. It is common to all professionals.

This two-way wonder has pitched enough innings and made enough plate appearances to qualify both for the 2022 pitching and batting titles. He is said to be the first ballplayer to do so since 1901.

In August, he matched Babe Ruth’s 1918 feat of double-digit wins and homers.

Ohtani’s outstanding performance has reached an entirely new dimension. In yesterday’s game, fans in the stands celebrated his accomplishment with handwritten signboards, one of which said, “History.”

Ohtani remained his usual unassuming self, however, at a post-game interview. With an easy smile that even suggested quiet confidence, he said he hopes to further improve his numbers by trying even harder next year and beyond.

Ever since he was a first-year student at Hanamaki Higashi High School in Iwate Prefecture, Ohtani has always started aiming higher once he came close to attaining a goal.

Though he has reached the heights of being a “once-in-a-century” success, he is obviously not ready to rest on his laurels just yet.

I wonder what new dreams he is going to let us see. I can’t wait.