JAXA’s launch of its Epsilon-6 rocket ends in failure

The Epsilon-6 rocket lifts off from the Uchinoura Space Center in Kimotsuki, Kagoshima Prefecture, at around 9:50 a.m. on Oct. 12. About 10 minutes later, it was ordered to self-destruct. (Masayuki Kaku) 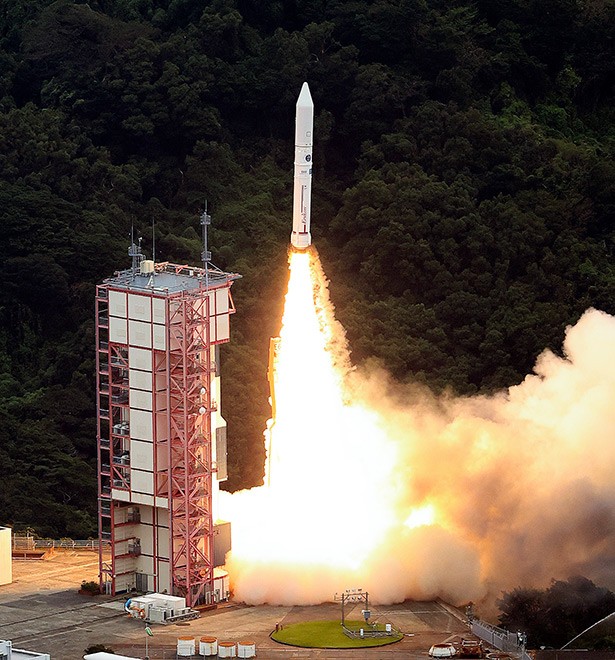 The Epsilon-6 rocket lifts off from the Uchinoura Space Center in Kimotsuki, Kagoshima Prefecture, at around 9:50 a.m. on Oct. 12. (Eiji Hori)

KIMOTSUKI, Kagoshima Prefecture--An Epsilon-6 rocket carrying eight satellites into orbit on Oct. 12 suffered a malfunction after liftoff and was ordered to self-destruct, according to the Japan Aerospace Exploration Agency.

This is the first failed launch of an Epsilon rocket.

The solid-fuel rocket lifted off from the Uchinoura Space Center in Kimotsuki, Kagoshima Prefecture, at around 9:50 a.m., JAXA said.

About 10 minutes after the launch, however, JAXA officials noticed the rocket was deviating from its intended axis and so could not be placed into orbit around the Earth. Thus, they abandoned the mission and sent a command to the rocket to self-destruct.

JAXA is examining the failure to determine what went wrong. The last rocket launch failure was the H2A No. 6 rocket in 2003, the agency said.

The eight satellites that were destroyed included two commercial satellites, which was the first time such satellites were being transported into space, according to JAXA.

A venture company in Fukuoka city developed the commercial satellites. They were designed to observe the Earth’s surface using radar, regardless of the weather and the time of day.

Other satellites included one that would have conducted a technology demonstration to expand communication capabilities between satellites and the ground network, and another that was made with a metal 3-D printer by Waseda University.

The Epsilon-6 rocket measured 26 meters long and weighed about 96 tons.

The launch was originally scheduled for Oct. 7, but was postponed due to problems with the location of the positioning satellite, which could have made it difficult to track the rocket’s location.