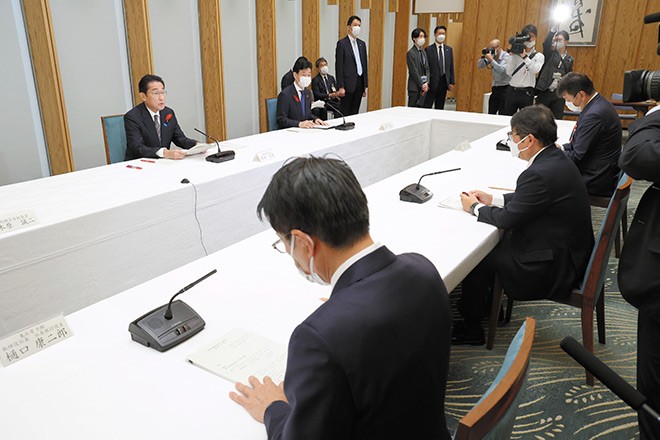 Prime Minister Fumio Kishida is slowly plugging into all outlets for a plan to keep down surging electricity bills.

Kishida met on Oct. 12 with the chairman and other officials of the Federation of Electric Power Companies of Japan (FEPC).

“We will directly support households and companies that will be affected by sudden increases in electric rates,” he said.

He asked for the cooperation of electric power companies as the government comes up with a plan to quickly provide support by utilizing the existing electricity billing system as much as possible.

The government plans to implement the new system before next spring, when further rate surges are expected.

Electric rates have risen by 20 to 30 percent because of the surge in energy prices caused by the Russia's invasion of Ukraine, as well as the weakening yen.

The government expects the rates to rise an additional 20 to 30 percent from next spring.

Kishida has pledged to implement an “unprecedented measure” to deal with that expected increase.

The Ministry of Economy, Trade and Industry will come up with the specific program.

Kishida did not go into details in the meeting with FEPC officials but indicated the government might provide support funds to the electric power companies that the companies would use to reduce the burden on consumers.

It remains to be seen, however, if the utilities will actually carry out that idea. Concerns are being raised that the funds going directly to the utilities might be used to shore up their financial conditions instead.

Yasutoshi Nishimura, the economy minister, said his subordinates would accelerate their consideration for the system but admitted the scale and schedule for the system had not yet been set.

Officials of the ruling Liberal Democratic Party, including policy chief Koichi Hagiuda, have said they wanted the new program to cover at least half of the increase in electricity rates.

About 15 trillion yen ($102 billion) worth of electricity was sold for the year until June. If the goal set by LDP officials is met, the government would have to spend about 2 trillion yen over the course of a year to cover half of the increase in electric bills.

Another problem facing the government is coming up with a plan that covers the 700 or so companies selling electricity. Each has a different rate plan, meaning that ensuring equal support to consumers could become a major headache.