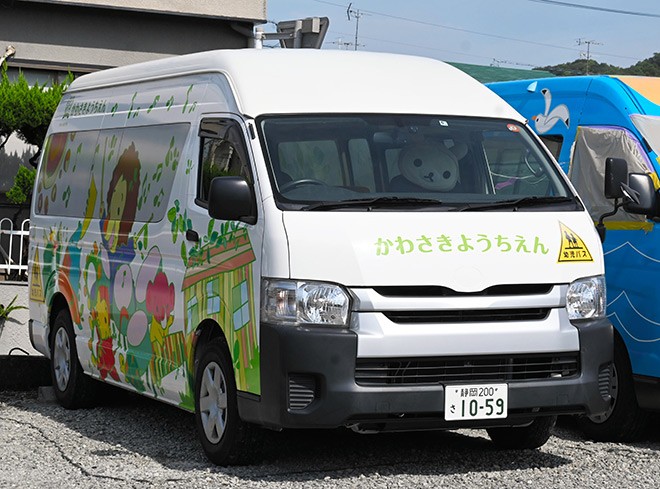 A school bus owned by the Kawasaki Kindergarten School in Makinohara, Shizuoka Prefecture, sits in a parking lot on Sept. 14 after a 3-year-old girl was found unconscious with no vital signs inside it on Sept. 5. She later died. (Akari Uozumi)

Kindergartens and nursery schools will be required as of April next year to conduct a roll call when students are ushered off the school bus to ensure no child is left behind.

The government released the “urgent measures” on Oct. 12, which will also mandate that schools install new safety equipment on their buses as well.

The new rules come in response to tragedies where young children were left on school buses in the summer heat and died.

Japan has also for the first time prepared safety guidelines for driving school buses to ensure no child is left on a bus.

The requirements will be imposed on registered "kodomoen" centers for child care, education and special support schools for disabled children, kindergartens and nursery schools.

If the schools break the rules, they could be given an order to suspend operations, officials said. The government will decide what penalties will be incurred when a school does not follow such an order.

According to a government survey conducted after the incident in Shizuoka Prefecture, 22,842 school buses are used at 10,787 schools across the nation.

It found 88 percent of nursery schools, 90 percent of kindergartens, and 89 percent of registered kodomoen centers check the number of children and their names every time the students get on and off the school buses in the morning.

It also found that only between 1 to 2 percent of these schools have introduced a system to prevent children from being left behind, such as by equipping the buses with a sensor to detect any remaining children on board.

In designing the new measures, the government focused on preventing human error.

The government will pay part of the costs for installing the new equipment on buses to encourage early compliance with the new rule.

The new measures come in response to a recent incident in Makinohara, Shizuoka Prefecture, where a 3-year-old girl attending Kawasaki Kindergarten School, a registered kodomoen center, died after being left in a school bus for hours in the heat.

That followed a similar incident in Nakama, Fukuoka Prefecture, in summer last year.

But after the accident in Fukuoka, the government had only issued a notice to prefectures and municipalities on the safe operation of school buses.

This time, the government decided to introduce more direct measures.

However, the latest policies are “urgent measures” taken by the government. Officials have yet to arrive at fundamental solutions to secure the safety of young children at places such as nursery schools, which are constantly suffering from staff shortages.

Securing funding to ensure the safety of schoolchildren is another challenge.

Masanobu Ogura, the minister in charge of children’s policies, said on Oct. 12 that he is aware of these problems and will work toward a solution.

“We have listened to various views and are aware that the shortage of front-line workers is severe,” he said. “I will make efforts to secure stable funding (to solve the issue) as a minister in charge.”