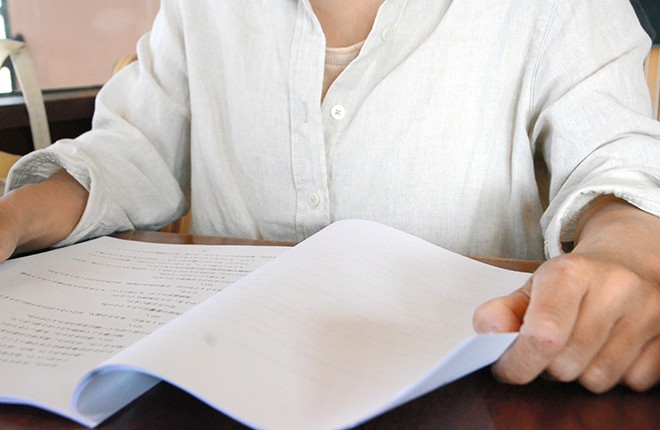 A woman who sued her father for sexually abusing her when she was a child on Oct. 12 in Hiroshima (Eri Niiya)

HIROSHIMA--The Hiroshima District Court on Oct. 26 dismissed a damages lawsuit filed by a woman against her father who sexually abused her when she was a child, saying that the statute of limitations had expired.

She said she was sexually abused repeatedly more than two decades ago and has suffered from post-traumatic stress disorder (PTSD).

But the court dismissed her claim because, “the statute of limitation has passed and the right to seek compensation has run out.”

The woman, visibly shocked, said at a news conference, “I cannot understand it.”

According to the legal complaint, the abuse started when the woman was attending a nursery school.

The complaint said the first rape occurred when she was a fourth-grader, and she was sexually abused three to four times a week until around the time she was a second-year junior high school student.

Since around 2017, she has suffered flashbacks of the abuse.

After consulting a nonprofit organization that supports victims of sex crimes, she decided to sue her father.

The father said more than 20 years have passed since his last illegal act and the statute of limitations had expired, asking the court to dismiss her claim.

The woman stated, “My physical and emotional damages caused by my own father’s sexual abuse is beyond description. It was realistically impossible for a child to sue a parent.”

She had also said that the court “should not let him escape his responsibility.”

But the court sided with her father.

The woman said the earliest incident she can remember occurred when she was attending a nursery school.

Her father placed her on his lap, made her watch a pornographic video and touched her.

When they bathed together, he touched her lower body, telling her he was “washing her.”

On Christmas when she was a fourth-grader, the family enjoyed a holiday dinner.

That night, her father raped her for the first time.

“Tonight of all nights? That’s what I thought. I still remember that,” she said.

It was only the beginning of years of nightmarish abuse.

Men later came into her life and she contemplated marrying her boyfriend.

But she said a feeling of disgust toward men has remained with her. She suffered from tinnitus and dizziness.

After her grandmother, who filled in for her often-ailing mother to raise her, died in 2017, she could not suppress her surging anger any longer, she said.

“I was absolutely livid at the sight of a happy family. Why do I have to suffer through such hell when these people can live happily?”

She consulted a nonprofit organization that supports victims of sex crimes and learned that she could seek legal action.

Until then, she had never thought about suing her father, who is socially and economically more powerful than she is.

However, she decided, “I cannot take my life back, nor can I restart my life. But I need to find some sense of closure.”

She filed a lawsuit at the court in August 2020.

In 2021, she was diagnosed with PTSD based on her vivid flashbacks of sexual abuse and the rage she expresses even over minor things.

“The physical and emotional damage caused by being raped over and over by your own father is immeasurable,” she said in the trial.

In a statement submitted to the court, she made a plea, “How could a small child recognize abuse as abuse? How could a child stop the abuse?”

She also told reporters, “We cannot eradicate sexual violence unless we have a society where a victim can speak out at any time.”

Her father in the trial admitted that he sexually assaulted her.

While contesting the duration, times and contents of the abuse, her father admitted that what he did “was morally unforgivable” and apologized “for hurting her.”

Still, he refused to pay her damages, citing the statute of limitations.

Her father's attorney also said that it is “medically impossible” for his daughter to suffer from PTSD after more than 20 years, and denied the causal relationship between his acts and her disorder.

The defense said that his daughter accused him of abusing her three or four times a week, but claimed that “she substantially exaggerated the facts” and he abused her “five to six times in total at maximum.”

(This article was written by Eri Niiya and Hana Matsuo.)