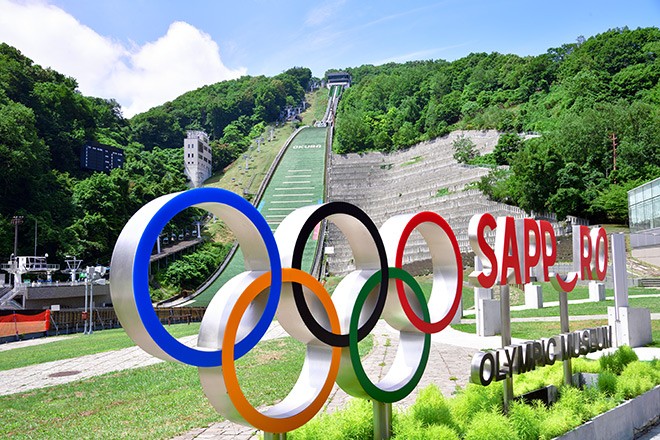 The Olympic rings are on display at the Okurayama Ski Jump Stadium in Sapporo. (Ichiro Matsuo)

The Sapporo government in November 2021 estimated the overall cost of hosting the Winter Games at between 280 billion yen and 300 billion yen.

According to the sources, the range has risen to between 297 billion yen and 317 billion yen.

The city said around 80 billion yen would be needed to build the Olympic venues. Sapporo city was set to pay 45 billion yen of the construction costs.

Prices for a wide range of products, including building materials, have been soaring this year, caused in part by Russia’s invasion of Ukraine.

Central banks in the West, notably the U.S. Federal Reserve, have raised interest rates in attempts to contain inflation. The Bank of Japan, however, continues to stick to its low interest rate policy.

The widening gap in interest rates between Japan and the West has accelerated the yen’s plummet against the dollar.

“We will review the expenses because of changes in the inflation rate and the foreign exchange rate,” Sapporo Mayor Katsuhiro Akimoto said in an interview with The Asahi Shimbun earlier in October.

Minus the construction costs, the previously estimated 200 billion yen to 220 billion yen needed to host the Winter Olympics would, in principle, be covered by revenues from sponsorship agreements as well as funds put up by the International Olympic Committee.

City government sources said a new estimate would be submitted to a special committee of the city assembly. The next assembly session is scheduled to convene on Nov. 8.

Sapporo’s estimates so far do not include money already spent in trying to win host status.

Since fiscal 2014, the Sapporo city government has spent about 1.7 billion yen on such activities, and a record 600 million yen has been set aside in the current fiscal year budget.

Sapporo’s bid to host the Winter Olympics has been hurt in recent months by a bribery scandal that has embroiled a former executive of the Tokyo Olympic organizing committee.