EDITORIAL: Abe state funeral raises host of issues on what is appropriate 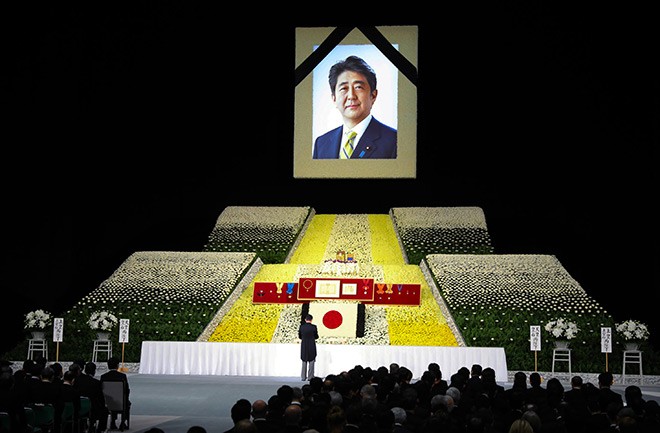 The state funeral for former Prime Minister Shinzo Abe was held at the Nippon Budokan hall in Tokyo on Sept. 27. (Pool)

In light of this, we believe the government is obliged to carry out a review and assessment of the event before anything else.

If it tries to establish clear rules for future state funerals, then debate must surely start with the crucial question of whether this form of mourning is suitable for politicians.

Representatives of the ruling and opposition parties recently started talks at a special council for deliberation on issues concerning state funerals set up under the Lower House Committee on Rules and Administration.

The council is expected to set a “direction” for further discussions by the Dec. 10 end of the current Diet session after listening to explanations from the government and opinions from experts.

The government plans to conduct its own, separate review, and Kishida has indicated his intention to set “certain rules” for state funerals.

A key issue for the discussions would be the Diet’s involvement.

For Abe’s state funeral, Kishida failed to make efforts to win the support from a broad spectrum of society, including opposition parties, saying it was a decision that could be made within the jurisdiction of the government.

The opposition Nippon Ishin (Japan Innovation Party) criticized the way the decision was made, although it supported the state funeral itself.

It introduced a bill on state funerals drafted by lawmakers that would require advance approval by the Diet and a report to the legislature after the event.

But approval by the Diet is not enough to justify a state funeral for a politician.

The public was divided over Abe’s state funeral partly because of widely different evaluations of his domestic and foreign policy legacies.

Other factors included Abe’s controversial political style, which was marked by a lack of commitment to his responsibility to explain policy decisions and actions, as well as criticism against his “negative” political legacies, such as scandals concerning two educational institutions directly and indirectly linked to him and tax-financed cherry blossom-viewing parties.

Revelations about his close ties with the Unification Church, now formally called the Family Federation for World Peace and Unification, came to light after his murder and must also have affected public opinion on the issue of a state funeral.

As these facts demonstrate, it is by no means a simple or easy task to make a fair and convincing assessment of the legacies of a politician. Such an assessment is inevitably influenced by political positions and views.

Even though the decision to hold Abe’s state funeral was supported by a majority of Diet members, mostly ruling camp lawmakers, that cannot obscure the fact that the public was deeply divided over the issue.

Deliberations should not focus only on procedures.

It is vital to have debate on such fundamental questions as the purpose of a state funeral and whether such memorial services should be held for politicians.

Any violation of the people’s right to freedom of conscience or any attempt to force people to express condolences is unacceptable.

The central government did not ask local administrations or boards of education to hoist mourning flags or take other actions to mark Abe’s state funeral.

Still, government officials refrained from such requests only because they were facing a strong public backlash against the planned funeral.

It should not be forgotten that the Cabinet formally decided to ask a range of related organizations to express condolences when state and joint public funerals were held for former prime ministers.

Kishida probably wants to ensure that the debate will focus only on rules for future state funerals without delving into the question of whether his decision concerning Abe’s funeral was appropriate.

However, Kishida also needs to address fundamental questions if he understands his responsibility for forging ahead with the funeral without responding to questions and doubts that were being raised, which served only to worsen public distrust of politics.