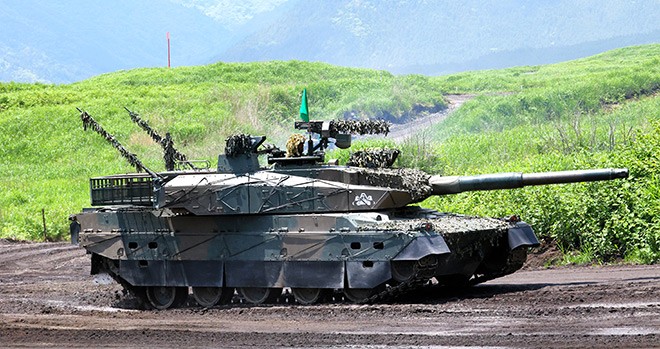 A Type 10 tank takes part in the Ground Self-Defense Force’s Fuji Integrated Firing Exercises in May in the Higashi-Fuji range in Shizuoka Prefecture. (Pool)

The Defense Ministry is becoming increasingly alarmed that a growing number of domestic arms companies are withdrawing from the industry--something that could undermine Tokyo’s ability to sustain a fight in an emergency.

The aircraft and vehicles used by the Self-Defense Forces are designed specifically for use by Japan. But the companies that produce them are seeing fewer purchases from the SDF due to thier price rises under limited defense budgets and more arms imports from other countries.

Defense Minister Yasukazu Hamada has even publicly expressed a sense of urgency over the matter.

Maintaining and strengthening the industry has become a major topic for decision-makers ahead of a planned revision of the government’s three key security policy documents.

An expert panel on national defense chaired by Kenichiro Sasae, former vice minister for foreign affairs, held its first meeting on Sept. 30, during which attendees called for “bolstering the security industry” and “countermeasures to expand military equipment exports.”

According to the Finance Ministry and other sources, the market is worth 3 trillion yen ($20.52 billion). One Defense Ministry insider said thousands of subcontractors work with major contractors to produce weapons.

While some 1,100 companies are involved in fighter manufacturing, as many as 8,300 work on producing destroyers.

But those enterprises are getting out of the market because the Defense Ministry does not buy weapons very often.

On top of having a lengthy procurement cycle, the government has scaled back its orders for new arms because weapon prices have shot up due to the increasingly advanced and complicated technologies now used.

For example, the E-2C early warning aircraft, which the Defense Ministry signed the contract for in fiscal 1990, came with a price tag of 9.9 billion yen. But the price of its successor, the E-2D, rose by 2.6 times to 26 billion yen.

Given that Tokyo’s defense spending only increases slightly every year, officials find themselves left with no choice but to make fewer purchases.

Another reason behind the shrinking demand is the growing number of imports from the United States.

Weapons totaling less than 200 billion yen were imported from Washington through its government-to-government foreign military sales program up until fiscal 2014. But that shot up to 700 billion yen by fiscal 2019.

That happened after Prime Minister Shinzo Abe was wooed by U.S. President Donald Trump’s “buy American” campaign. As a result, weapons imports rose from around 10 percent to about 20 percent.

Meanwhile, membership of the Japan Association of Defense Industry, which comprises major military equipment providers and first-tier subcontractors, dropped to 130 at present from 135 in 2017.

An industry insider pointed out that mostly small and midsize businesses have pulled out of the market.

“The reason is that their order numbers are not prone to rise, making it difficult for them to have clear future prospects,” the source said.

A representative of one leading weapons supplier said many corporations are only providing conventional products, meaning there are currently fewer projects for developing new items.

The Defense Ministry is looking to submit draft legislation to next year’s ordinary Diet session that would create a foundation to support cybersecurity efforts, help enterprises take over businesses withdrawing from the defense industry, and retain and improve special technologies.

Officials are also eyeing ways to boost exports of domestically made weapons.

They are focused on an upcoming review of guidelines for applying the “Three Principles on Transfer of Defense Equipment and Technology.” The idea is that armaments could then be sold to other nations, so long as certain conditions are met.

(This article was written by Naoki Matsuyama and Nen Satomi.)