1,000 hold rally in Tokyo in call to protect rights of transgenders 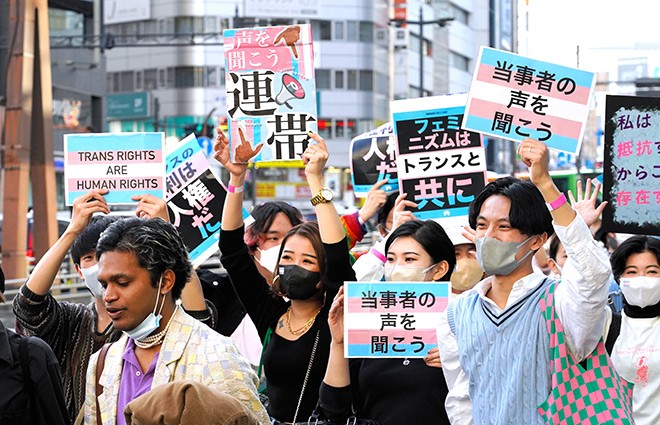 Rally participants standing up for the rights of transgender people parade in Tokyo’s Shinjuku Ward on Nov. 12. (Tsubasa Setoguchi)

Hundreds of people rallied in Tokyo to highlight the urgency of calls to protect the rights of transgender people.

Organizers estimated that about 1,000 people, Japanese and foreign residents alike, took part in the Nov. 12 parade in Shinjuku Ward. Participants hoisted placards displaying various messages to get their point across.

The demonstration was organized by Tomoya Asanuma, 33, and Tomato Hatakeno, 57. As transgenders, they work to disseminate information to raise public awareness about people whose gender identity is different from the gender they were thought to be at birth.

The rally, the second such one in the capital, was held ahead of “Transgender Day of Remembrance” on Nov. 20, which is marked globally to commemorate transgender people who died as a result of harassment, hate crime and other forms of discrimination.

“Although the term LGBTQ has become widespread in recent years, it still is the case today that many transgender people face difficulty in having others accept their way of life,” Asanuma said before the parade started.

Rally participants marched with flags of pink, light blue and white-–three colors used in the transgender rights movement--calling for solidarity and an end to discrimination.