Concrete melted off ‘pedestal’ for damaged reactor in Fukushima 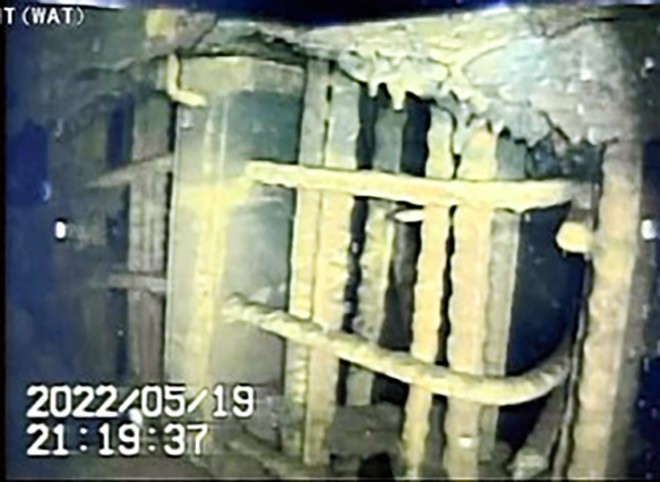 Rebars in the pedestal, which are normally covered with concrete, are seen exposed inside the No. 1 reactor at the Fukushima No. 1 nuclear power plant. (Provided by the International Research Institute for Nuclear Decommissioning and Hitachi-GE Nuclear Energy Ltd.)

The concrete support foundation for a reactor whose core melted down at the Fukushima No. 1 nuclear power plant has deteriorated so much that reinforcing bars (rebars) are now exposed.

Masao Uchibori, governor of Fukushima Prefecture, has expressed concerns about the earthquake resistance of the “pedestal” for the No. 1 reactor at the crippled plant operated by Tokyo Electric Power Co. (TEPCO).

Strong quakes struck off the coast of the prefecture in 2021 and 2022.

“There have been events that caused anxieties among residents of our prefecture, including damage to the foundation supporting the No. 1 reactor’s pressure vessel,” Uchibori told a prefectural assembly session in September. “We will check up on TEPCO’s efforts so the decommissioning work will proceed safely and steadily.”

The cylindrical pedestal, whose wall is 1.2 meters thick, is 6 meters in diameter. It supports the reactor’s 440-ton pressure vessel.

The interior of the No. 1 reactor’s containment vessel was inspected in May for TEPCO’s eventual plans to retrieve the melted nuclear fuel that dropped to the bottom of the vessel during the 2011 nuclear disaster.

The study found that the normally concrete-encased rebars were bare and the upper parts were covered in sediment that could be nuclear fuel debris.

The concrete likely melted off under the high temperature of the debris.

The International Research Institute for Nuclear Decommissioning (IRID), an entity set up by power utilities and nuclear reactor manufacturers, conducted a simulation in fiscal 2016.

IRID said seismic resistance would remain uncompromised even if about one-quarter of the pedestal was damaged.

However, only a part of the pedestal was inspected during the May study, and only from the outside.

The pedestal’s inside remains a mystery.

“The pedestal’s soundness is of foremost concern,” said Kiyoshi Takasaka, a former engineer with Toshiba Corp. who is now an adviser to the Fukushima prefectural government on nuclear safety issues. “It is important to first inspect the pedestal from the inside.”

TEPCO has prepared six types of robots to detect the fuel debris and perform other tasks in a series of inspections at the No. 1 reactor.

An internal study of the pedestal is planned toward the March end of the fiscal year as the final mission during the inspections. The task carries the risk of the robot hitting the sediment or other obstacles and being unable to return.

“We understand people’s concerns very well,” Akira Ono, president of TEPCO’s Fukushima Daiichi Decontamination & Decommissioning Engineering Co., told a news conference in October. “We hope to finish studies inside the pedestal by the end of this fiscal year.”

He said his company will scrutinize whether the previous assessment of seismic resistance is still applicable.

Haruo Morishige, who has been studying the Fukushima nuclear disaster, called for immediate emergency safety measures, such infusing concrete to reinforce the pedestal.

“There is a critical defect in terms of quake resistance,” said Morishige, based on a photo showing the interior of the No. 1 reactor.

He also served as an on-site manager for the No. 3 reactor at the Ikata nuclear plant operated by Shikoku Electric Power Co., including when the reactor was being built.

The photo, released following the May inspection, shows how concrete covering the cylindrical “inner skirt” of the pedestal had melted off, laying bare part of the steel frame and rebars from the bottom to the top.

The loss of concrete has also decoupled the pedetal’s walls from the floor, making it more prone to sway during seismic events, he added.

Morishige said that all concrete around the rebars inside the pedestal has likely melted away.

He also said fuel debris that flowed out from an aperture likely melted concrete around rebars over about a quarter of the outside circumference of the pedestal.

His simulation has shown that the support capability of the pedestal is now about three-eighths of the original level.

“In such a state, the reactor could topple over in an earthquake of upper 6 on the Japanese seismic intensity scale (of 7),” Morishige said.

He added that repeated exposure to seismic shocks could cause cracks in the remaining concrete, further undermining quake resistance.

“The very fact there are chances of the reactor toppling is unacceptable,” he said. “Officials should proceed with safety measures and inspections at the same time.”

(This article was written by Keitaro Fukuchi and Tetsuya Kasai.)