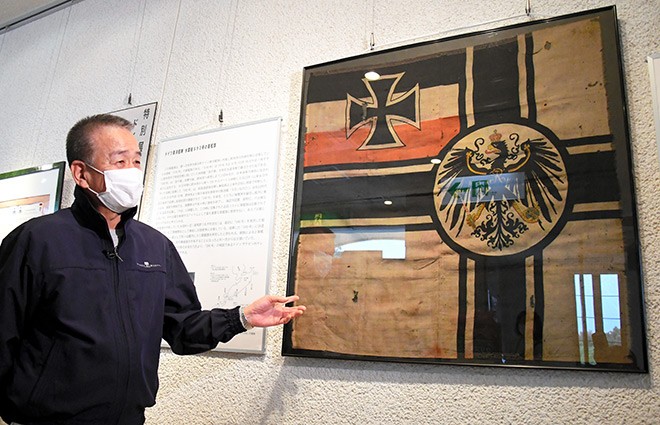 NARUTO, Tokushima Prefecture--A little-known episode about hostilities between Japan and Germany during World War I turned up when a flag featuring an unfamiliar design of a black cross and crowned eagle was brought to a history museum here.

Daisuke Ogaki, 64, brought the flag, which had been preserved at his home in Tsurugi, Tokushima Prefecture, to the Naruto German House here in May.

Riichi Ogaki, his grandfather, never spoke of how the flag came into his possession. Riichi, who grew rice and raised silkworms along the Yoshinogawa river, died in 1976 at age 84.

But Daisuke’s mother, Hanako, 94, told him when he was in his late 20s that Riichi obtained the flag from a German warship. After she turned 90, she expressed her hope that the flag would find a good home.

Daisuke paid his first visit to the German House, which is dedicated to preserving the history of the Bando Prisoner-of-War Camp. The facility is known for its humane treatment of German POWs from World War I.

“This one is authentic,” Mori told him excitedly. “It has tremendous historic value.”

An appraisal by the German House showed the flag is a war ensign of the S90, a torpedo boat of the German East Asia Squadron, which fought against Imperial Japanese armed forces in the Chinese port city of Tsingtao (Qingdao) during World War I.

On the breast of the eagle on the flag are the entwined letters “FR,” short for the Latin “Fridericus Rex,” which refers to Frederick the Great, the king of Prussia. The design was identical to that of the ensign used by the Imperial German Navy, officials said.

A decisive piece of evidence came from the military service record that Riichi kept.

He took part in the 1914 Siege of Tsingtao, where allied Japanese and British forces attacked Germany’s East Asian foothold in the city. Riichi, who was a fireman 2nd class aboard the Destroyer Nenohi, possibly joined the search for the S90, which had run aground, officials said.

Japanese and British forces won a crushing victory in the Siege of Tsingtao, but Japan lost its Cruiser Takachiho, which was serving as an auxiliary vessel, to a torpedo attack that claimed the lives of around 280 crew members. The S90 is the German warship that scuttled the Takachiho.

Mori’s explanation reminded Daisuke of what Riichi had said when he was alive.

Riichi, who in his later years became engrossed in growing bonsai, seldom discussed the war.

Still, he said: “A ship can sink quite quickly. It splits into two, pitches the bow toward the heavens and goes down in the twinkling of an eye.”

“My grandfather was possibly referring to how the Takachiho was sunk by the S90,” Daisuke said. “Family members of the war dead would not feel happy if they were to learn the naval flag had been kept (as a private possession).”

In responding to an inquiry from the German House, Bauer confirmed the flag is a naval ensign of the S90 and expressed his astonishment that the emblem had been preserved in Japan in such a good condition.

“The flag is not just a piece of cloth but amounts to what is called a ‘narrative exhibit’ in museology, and recounts the fate of the S90’s crew members,” Bauer said in his comment.

Daisuke agreed to a proposal from the German House for the flag’s return to Germany.

“Many people don’t even know that Japan once waged war against Germany,” he thought at the time. “Perhaps it is worthwhile to have the flag shown to many people to help pass down the history of the war.”

The naval ensign is on special exhibit at the German House through Dec. 27.

It is expected to be donated to the Bundeswehr Military History Museum in Dresden, the capital of the German state of Saxony, early next year.

“I was surprised by this chance development, where someone in Tokushima Prefecture served in war 108 years ago and preserved a German naval flag from the time,” Mori said. “The decision by his grandson to donate the flag will allow the tragic nature of war, and friendship between the two countries, to be passed down to posterity.”