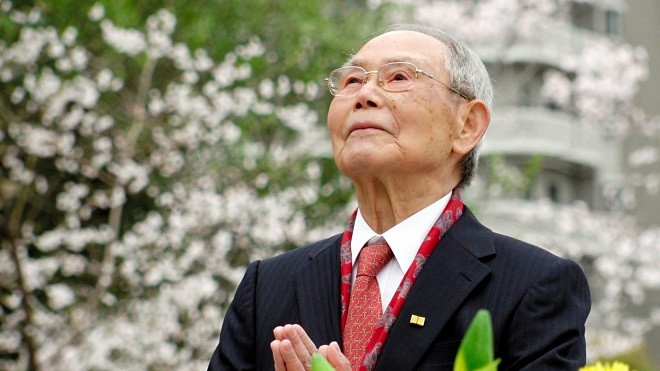 HIROSHIMA--A new documentary video produced by a nonprofit organization shows the late Lee Jong-keun, an ethnic Korean who grew up in Japan, telling his life story of overcoming discrimination and surviving the atomic bombing of Hiroshima.

He was 16 when he was exposed to heat rays from the atomic blast, about 2 kilometers from ground zero on Aug. 6, 1945, which left him hovering between life and death.

The new video is called “Hiroshima: Voices/ Lee Jong Keun,” by ANT-Hiroshima, and an edition with English subtitles is being prepared as well. The organization hopes to have the work screened in various cities.

The hour-long video was unveiled on Nov. 6 at an event held in Lee’s memory, before an audience of just over 100 people, at the Hiroshima Peace Memorial Museum. It shows Lee speaking abroad about his tumultuous life.

He began providing testimony of his firsthand atomic bomb experience a decade ago at the invitation of the international NGO Peace Boat and continued giving energetic public speaking performances until the very last years of his life.

Lee was born in Shimane Prefecture after his parents came over from Korea to Japan, when Korea was under Japan’s colonial rule from 1910 to 1945.

His testimony covered much more than the atomic bombing. He also shared accounts of the racial discrimination he faced in Japan.

One day in his childhood, a penny candy store owner stopped him by calling out, “Hey, Korean,” and poured urine on him. When there was bullying or other mischief at his school, he was assumed to be the culprit just because he was Korean.

Several years into a job with the now-defunct Japanese National Railways, Lee was called to submit a certified copy of his family register, whereupon he quit the job for fear he might be fired because of his nationality.

Lee also spoke out about Japan’s history of colonialism, a controversial topic in this country.

“Japan invaded many other countries,” he would say.

That would put him on the outs with members of his audience.

“Some people, not just among the general audience but fellow atomic bomb survivors as well, confronted Lee with inconsiderate views, accusing him of being ‘anti-Japanese,’” said Akira Kawasaki, a Peace Boat co-leader.

But when that happened, Lee just kept smiling and continued talking, without flinching.

There was one thing that Lee would never fail to add after telling young people about the history of Japan’s aggression and about discrimination: “Young ones like you are not responsible for what Japan and the Japanese did in the past. But you should never discriminate against others or start a war against other countries. You are responsible for creating the future.”

Several scenes like this are documented in “Hiroshima: Voices/ Lee Jong Keun.”

Lee had long lived under a Japanese common name, but he revealed his ethnic name when he participated in a cruise organized by Peace Boat. He had said he applied for the cruise so he could “tour around the world for free.”

When Peace Boat invites atomic bomb survivors to take part in its cruises, the group selects the invitees from among applicants who enter an open competition. But Lee was invited to go a second time, two years after his first trip.

“Apart from Lee, very few others were able to tell accounts with conviction on the basis of their original viewpoints and experiences,” Kawasaki said.

The number of atomic bomb survivors who are still living has dropped sharply in recent years, meaning the number of people like Lee who can speak about their firsthand experiences of the bombing is dwindling.

Welfare ministry figures show there were 118,935 certified Hiroshima and Nagasaki atomic bomb survivors across Japan as of the end of March, down more than 90,000 from a decade earlier. On average, they were 84.5 years old.

“We are happy to help anyone who would want to show the video, whether at an ordinary screening session, in educational settings, or at meetings--no matter how small,” said Tomoko Watanabe, executive director of ANT-Hiroshima.

The English-subtitled edition is expected to be completed sometime around January.