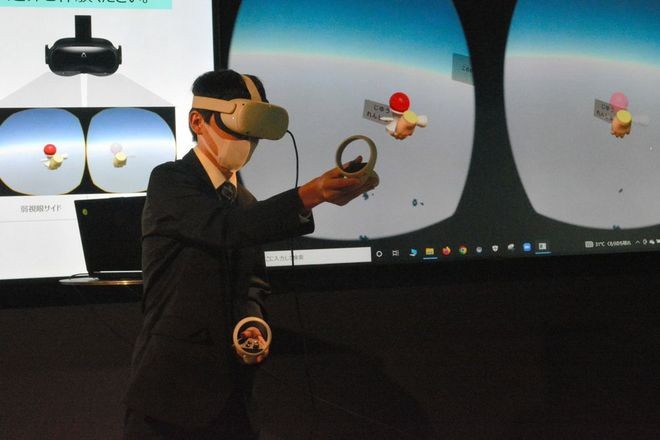 A user plays a “kendama” wooden cup-and-handle game on a virtual-reality app to improve their weak eyesight during a demonstration held in Tokyo’s Otemachi district. Images displayed for the right and left eyes are shown on the screen in the backdrop. (Hideki Aota)

A major trading house is developing an app for children to improve their vision just by playing virtual-reality games with specialized goggles.

Sumitomo Corp. plans to market a therapeutic video game with the goal of making it commercially accessible under the health insurance program in fiscal 2025, at the earliest.

As 3 percent of children are said to have lazy eyes, the offering is expected to primarily help patients with anisometropic amblyopia--a condition characterized by having differing visual abilities in the right and left eyes--to obtain better eyesight.

Under the conventional treatment program, a patient often covers the stronger eye with a patch for several hours every day to have the weaker eye used more actively, stimulating the optic nerves.

Though vision is thought to recover more smoothly among infants and children, such young patients do not want to wear eyepatches in many cases, causing problems for their guardians.

Working with InnoJin Inc., a Tokyo-based medical start-up affiliated with Juntendo University, and ImaCreate Co.--famed for its quality virtual-reality imaging and also headquartered in the capital--Sumitomo began creating a system in which people will be able to receive therapy while playing games.

A prototype of the traditional “kendama” wooden-cup-and-handle game was created as the first step.

A patient whose right eyesight is poorer will, for example, watch vivid images via goggles with the right eye, while the left side will be rendered blurred or transparent. The user will hold devices in their hands to interact with displayed images and wield a digital cup and handle mainly with the assistance of the right eye to improve it.

While adjusting the ball’s speed and requiring players to put the ball into cups in succession, the software is planned to cater to a range of individuals of different ages with varying degrees of kendama skills.

The app, which can be downloaded to goggle devices, will constantly show the time one has spent on the kendama game as well as other indicators of the treatment’s progress.

Experiments will be conducted to determine how long daily therapy should take. Correlation between the treatment period and the expected eyesight recovery will also be examined. Other games will also be considered.

A clinical study is scheduled to start in fiscal 2023. Children suffering from poor eyesight may be solicited in the future to take part in larger-scale clinical research, according to Sumitomo representatives.

One of a series of leading trading companies that are increasingly concentrating on medical services, Sumitomo defines its healthcare department under the firm’s midterm business plan as a strategic field where digital technology can be taken advantage of.

Sumitomo said it will invest hundreds of millions of yen (millions of dollars) in the app’s development, making full use of the huge trade house’s financial muscle.

The know-how accumulated via equipment development and medical agents’ distribution will likewise be used.