A-bomb survivor who learned English to spread his message 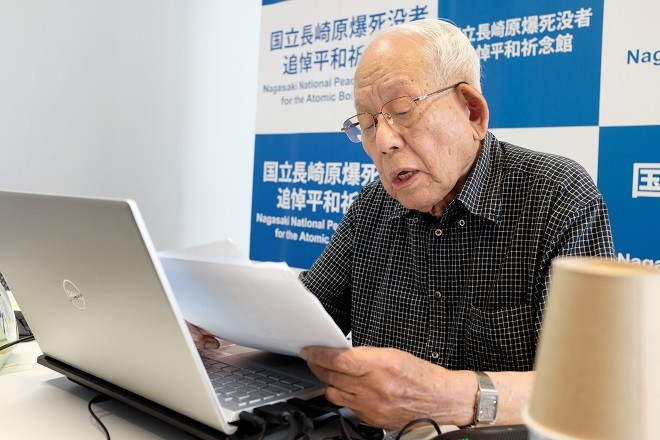 Yoshiro Yamawaki talks about his experiences of the 1945 atomic bombing of Nagasaki during a worldwide online event held in June 2021. He expressed his hope he would have more opportunities to take part in such events. (Mizuki Enomoto)

NAGASAKI--Yoshiro Yamawaki, a rare voice among hibakusha because he made a point of learning English in his later years to get his message across to a wider audience, has died at the age of 88, his family announced.

The cause of his Sept. 17 death was given as intrahepatic bile duct cancer and liver cell cancer.

The survivor of the Aug. 9, 1945, atomic bombing of Nagasaki was one of the most active “storytellers” in the dwindling hibakusha community.

He decided to learn English so he could share his experience with the rest of the world.

Friends and family members described him as a quiet person who exuded dedication through his passion of talking about the horrors of nuclear warfare.

He was 11 years old when the atomic bomb detonated over this teeming city in Kyushu, southern Japan.

Yamawaki would recall how he went looking for his father who was working at a plant near ground zero and found charred remains. Family members tried to cremate his father’s body but part of it remained unburned and milky brain substance seeped from his skull. Yamawaki fled from the scene in horror.

Yamawaki was determined to share his heart-wrenching memories, and spoke of his experiences in a reserved, matter-of-fact manner.

Those who met him were often struck by the seemingly neutral tone of his voice as he talked about the bombing and its aftermath, unable to comprehend how he could keep his emotions in check.

Yamawaki became a hibakusha storyteller after he sent a letter to The Nagasaki Shimbun newspaper in 1994, in which he mentioned how he spoke about his wartime experience at a rally.

“I keenly felt how frustrating it was not to be able to share my overwhelming emotions,” he wrote.

This part caught the attention of Ranko Matsuo, 75, a member of the Nagasaki Foundation for the Promotion of Peace.

Even after he was asked to speak about his experience and began to do so, Yamawaki said he was moved to tears and stammered for words when he began talking about the scene he encountered when he came across his father’s body.

But eventually, Yamawaki changed his speaking style so as not to get emotional.

“It would sound obtrusive if I got emotional,” he said.

Yamawaki never faltered in his even-toned narrative of never-ending sadness, which made his role as a master storyteller even more compelling.

After Yamawaki started his storytelling activities, he devoted himself to studying English, saying it would give him more time to speak if he didn’t have to wait for the interpretation to finish.

He took to going on walks while listening to recordings of movie lines on headphones.

In 2010, Yamawaki was appointed as Special Communicator for a World without Nuclear Weapons by the Foreign Ministry and went overseas to talk about his experiences of the atomic bombing.

He also attended study sessions featuring memoirs of hibakusha written in English on a monthly basis, bringing notebooks filled with Japanese translations he had prepared beforehand.

When members of generations that had not experienced war attended his storytelling sessions, he would also explain the social background that prevailed at the time of the bombing.

And when school trips to Nagasaki were canceled due to the novel coronavirus pandemic, robbing students of opportunities to further their peace education, Yamasaki often joined online events to speak about his experiences to participants from across the world.

“I could feel his determination, as if he were saying he wouldn’t want anyone else to suffer like he did,” said Yuki Ogawa, 22, a senior student at Kwassui Women’s University in Nagasaki who attended study sessions with Yamawaki, recalling how he continued learning and sharing his stories.

In March this year, Yamawaki was told he didn’t have much time left.

His family said he was worried about how much longer he could continue his lectures.

He didn’t stop giving lectures until the end of June, ever mindful of requests from schools, even if it meant lugging a personal computer and information materials, taking buses and walking up slopes to get to venues.

He left about 200 textbooks for English learners at his home, in addition to shelves overflowing with materials related to the atomic bombings.