EDITORIAL: Kishida-Xi meet ought to open the door to fixing bilateral ties 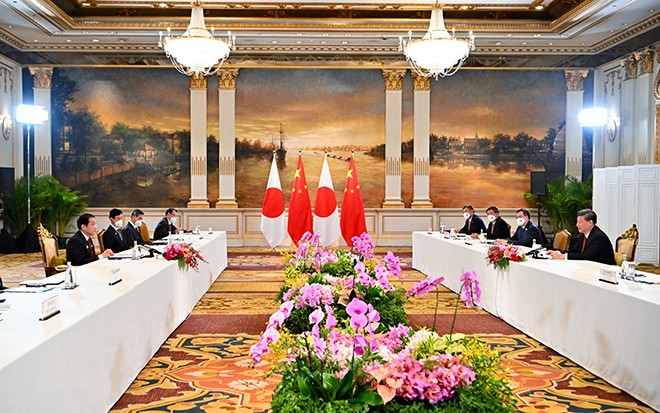 Japan and China need to work more closely to rebuild the international order and ensure regional stability as Russia’s aggression against Ukraine has shaken the world and increased uncertainty in the security landscape in the Asia-Pacific region. The two countries should take the diplomatic opportunity created by the recent face-to-face meeting between the two leaders to start the process of curing their deeply damaged relationship.

Prime Minister Fumio Kishida and Chinese President Xi Jinping held their first face-to-face talks in Bangkok on Nov. 17. A state visit to Japan by the Chinese leader scheduled for spring 2020 was postponed due to the COVID-19 pandemic. The bilateral relationship has since become frosty due to bitter rivalry between the United States and China and heightened tensions over Taiwan. Held against this backdrop, the first summit between the two countries in around three years was a welcome development.

During the meeting, Kishida reportedly expressed Tokyo’s “grave concerns” about Chinese military moves in areas around Japan, including waters near the disputed Senkaku Islands of Okinawa Prefecture in the East China Sea. But the two leaders agreed to seek closer communication regarding national security issues. This represents a step forward in diplomatic efforts to ease regional tensions and prevent unexpected security emergencies. It is vital for the two governments to follow up on the agreement by taking effective and specific steps like swiftly setting up a hot line between the two nations’ defense authorities and reopening bilateral security dialogue.

Kishida and Xi also shared concerns about Russia’s threat to use nuclear arms against Ukraine and saw eye to eye in opposing nuclear warfare, according to Japanese government officials. Xi reportedly voiced similar views during his recent meeting with U.S. President Joe Biden. We hope Xi will embark on reaching a truce.

Kishida voiced expectations that China will play a key role in reining in North Korea’s reckless and provocative behavior. North Korea has carried out a flurry of missile launches in recent weeks. On Nov. 18, it fired a suspected intercontinental ballistic missile which landed inside of the Japanese Exclusive Economic Zone off the western coast of Hokkaido. Pyongyang’s dangerous provocations are a destabilizing factor in the region. Beijing, which has close ties with Pyongyang, should take responsible actions toward the secluded regime.

A single summit cannot restore mutual trust between Japan and China as their relations are strained by many complicated issues and challenges. Some Japanese policymakers are calling for China to be described as a “grave threat” to Japan’s security in the revised National Security Strategy, to be published late this year, instead of as a source of security “concern” as in the previous versions. Beijing is closely monitoring the move with a sense of alarm.

There is no disputing the fact that China’s rapid military buildup is heightening tensions in the region by changing the military landscape in Northeast Asia. But Tokyo cannot hope to promote positive changes in the situation simply by trying to counter China’s growing military assertiveness by enhancing its alliance with the United States and its own defense capabilities. Japan’s diplomatic prowess is facing its most critical test yet as it tackles the challenge of building mutual trust with China.

Kishida and Xi also agreed to seek bilateral cooperation in a wide range of areas such as the economic, environmental, health and nursing care fields. They also agreed to consider Japanese Foreign Minister Yoshimasa Hayashi’s visit to China and restart minister-level talks between the two governments.

This year marks the 50th anniversary of the normalization of diplomatic relationship between Japan and China. Exchanges between citizens of the two countries have increased sharply over years although they have been restricted by the pandemic. In contrast, however, the network of political, social and cultural linkages between the two countries has been shrinking.

The latest meeting should lead to an expansion of bilateral ties and interactions on all levels.