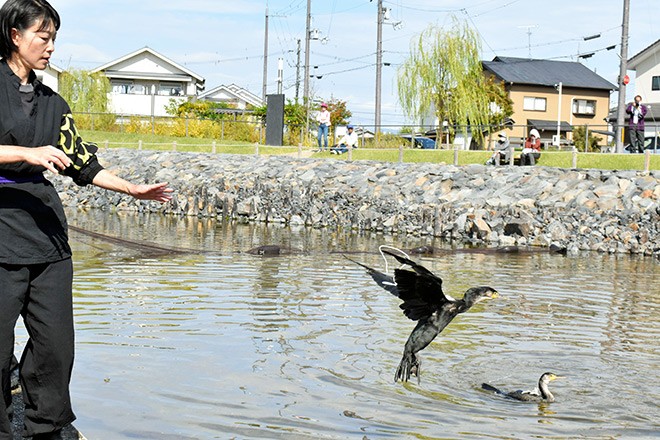 UJI, Kyoto Prefecture--When masters call out to a flock of Japanese cormorants, the birds return to the bank of a man-made pond, their throats bulging with fish.

The scene resembles the traditional cormorant fishing practiced in many parts of Japan, except that the birds are not tied to a leash.

Untethered cormorant fishing has been revived in Japan for the first time in 21 years after fishers here built solid trust with the birds through five years of intensive training.

During the first demonstration held on Oct. 22, the cormorants, back in their masters’ arms, disgorged the fish kept in their gullets, drawing a round of applause from a gallery of about 30 spectators.

“The birds returned just as they were supposed to, and they are so well-tamed,” said Yasuko Kobayashi, 63, a nurse who came from Kyoto with a friend to watch the session.

The Uji City Tourist Association reinstated the practice of untethered cormorant fishing after training a pack of nine artificially incubated cormorants, born and raised in the city.

Fishers affectionately refer to the birds by the generic nickname of “Utty” after the word “u” (pronounced in Japanese as “oo”), which is Japanese for cormorant.

“I was convinced they would make it,” Mariko Sawaki, 48, who leads the pack of cormorants, said after the public session held in the pond by the side of the Ujigawa river. “I’m relieved they’ve done it.”

Tethered cormorant fishing along the Ujigawa river, a specialty on summer nights, has long been popular among tourists.

“Spectators will feel the ties we have forged with the (untethered) cormorants,” Sawaki said. “We will be able to entertain them in a different way than we do on summer nights.”

In conventional cormorant fishing, a fisherman adjusts the tightness of the rope wound around a cormorant’s throat to prevent the bird from swallowing river fish it has caught, such as sweetfish. The cormorant disgorges the fish when the fisherman pushes at its throat.

Untethered cormorant fishing was exclusively practiced along the Takatsugawa river in Masuda, Shimane Prefecture, until the tradition was discontinued in 2001.

Like walking a dog without a leash, the technique requires strong bonds between humans and animals.

The Uji City Tourist Association in 2014 successfully had a Japanese cormorant hatched through artificial incubation for the first time in Japan.

Fishers found the hatchling was tamer than their wild counterparts because of imprinting, in which an animal takes the first creatures it sees to be its parents.

They began training the birds for untethered cormorant fishing in September 2017.

Twelve cormorants have been hatched through artificial incubation. The fishers have teamed up nine of the birds, the youngest being under 1 and the oldest being 8, for daily exercises.

Mention of cormorant fishing appears as early as in the “Chronicles of Japan” and the “Records of Ancient Matters,” both being official history books compiled in the eighth century.

The practice can be found for sightseeing purposes at 11 spots across Japan, including along the Nagaragawa river in Gifu and along the Oigawa river in Kyoto. Migratory Japanese cormorants caught in Hitachi, Ibaraki Prefecture, are typically used.