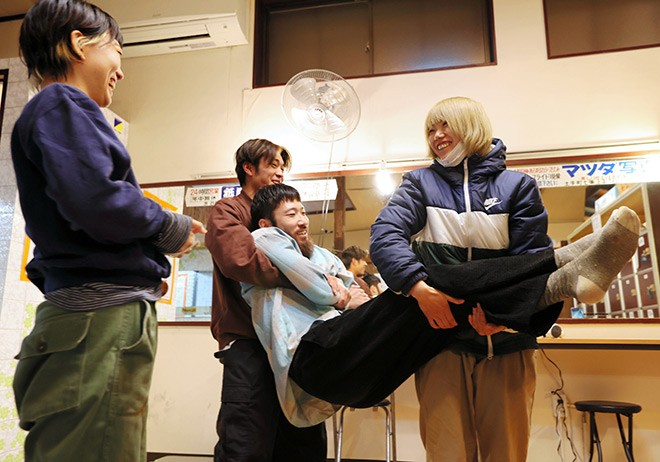 Staffers carry a person acting as an injured bather during an earthquake evacuation drill at the Sauna no Umeyu public bathhouse in Kyoto's Shimogyo Ward. (Toshiyuki Hayashi)

KYOTO--Twenty men and women were bathing or relaxing in the sauna at a century-old public bathhouse here on a recent evening--until they suddenly found themselves in the pitch dark.

An employee entered the men’s side and urged 10 or so bathers to quickly leave.

“The building may collapse, so put on the evacuation clothes and slippers and go outside immediately,” he shouted through a megaphone. “Your belongings will be taken out by staff later.”

There was no earthquake, though, and Sauna no Umeyu, a wooden structure believed to have been built at least 120 years ago, was not about to tumble down.

Everyone there was volunteering for a preparedness drill for what to do if they find themselves in the strange, dangerous and potentially embarrassing situation of bathing at a public bathhouse when an earthquake hits and knocks out the power.

The participants had applied after learning about the Oct. 27 drill, designed to simulate what would happen during an earthquake with an intensity of lower 5 on the Japanese scale of 7, through signs advertising the event and social media.

The male bathers hurried to the changing area, paying attention to small gaps and being careful of the slippery wet floor.

But once they got to their lockers, they stood there helplessly. They could not see the numbers to unlock them.

The bathhouse was ready for this. Regular customers placed boxes of spare T-shirts and shorts on the benches for other participants to put on. Since no one had time to dry off, the participants were still dripping wet when they donned the spare clothing.

The men all put on slippers and went outside. The female participants were wearing “yukata” casual kimono sewn with a rubber band at the waist.

Those who signed up found it harder than expected.

“It’s difficult to get around in the dark,” said a 51-year-old man who joined the drill with his child. “It might be better to go out naked first and put something on outside later. There were aspects of this I hadn’t thought about until I tried it.”

Umeyu, which is popular particularly among young people, is a fixture in Kyoto’s Shimogyo Ward. The bathhouse is hailed as a “holy site” among sauna enthusiasts, especially after it was used as a locale in a TV drama series.

No one knows for sure exactly how old it is, but the facility was founded sometime during the Meiji Era (1868-1912).

As many as 400 people bathe at Umeyu a day, and up to 50 are inside the building during peak hours--a lot of people to worry about in a disaster. Many customers in the evening are first-timers.

Sakura Endo, 27, who has worked for the bathhouse for three years, came up with the idea for the drill after experiencing an earthquake with an intensity of 3 when she was seated at the reception counter last year.

She remembers hearing the rattling sound of the old glass doors.

“I was astonished, and I couldn’t do anything,” she said. “I started thinking about what we should do as the operator in the event of a much bigger earthquake.”

When tremors strike, “sento” public bathhouses are at risk of collapse and fires can start in the boiler room. Bathers could also suffer injuries from glass shards and fallen lights.

A disaster management manual compiled for industry members involves complicated procedures. Endo read an article about an evacuation drill held at a bathhouse, but the participants were dressed in clothes.

“I started compiling a manual fit for this facility and thinking about measures to prepare for a situation where our customers are naked and wet,” she said.

Due to the potential risk that the bathhouse could collapse in a serious earthquake, the operator decided to prioritize having bathers evacuate from the building.

Umeyu now conducts an earthquake evacuation drill once every two months, following the manual that requires employees to direct bathers with instructions, among other things.

Involving bathers in the disaster scenario is also designed to encourage regulars to talk to other customers in the event of an emergency.

“We want to place importance on safety and security, ensuring that our (branding) efforts are not seen as superficial and hollow,” Endo said. “Disaster preparedness measures won’t produce immediate profits, but I think they will help sento be passed down through future generations.”