TASTE OF LIFE/ ‘Tonkatsu’ made of thin pork slices: Dish reflects cooking expert’s dream to dine with his mother 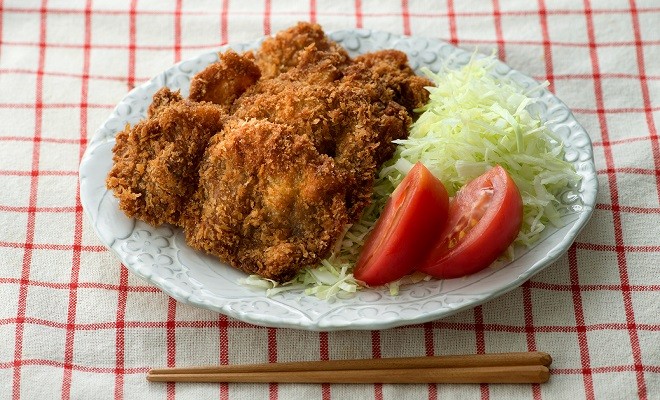 “Tonkatsu” made of thin pork slices (Photo by Atsuko Shimamura)

The cooking expert who calls himself “Joe-san.” has been posting his time-saving recipes on social media.

His mission is “to create as many happy dining tables as possible.” His quest started with the memory of his mother in his childhood.

He came from a family of four, consisting of his parents who both worked, an older brother and himself. He grew up watching his mother come home from work and do the household chores at a brisk pace.

It was natural for him to start helping her. When he returned home from elementary school, his mother would phone him and ask him to “cook rice” or “just cook miso soup.”

When she came home, it was time for her to prepare the main dishes.

Deep-fried dishes were her frequent choices. While freshly fried pieces were served on the table and the children dug in right away, his mother would not sit with them. She would eat standing while continuing to cook or washing the dishes.

“On TV, you would see lively dinner tables, but things were not like that at home. My mother seemed content to just fill her stomach,” recalls the cooking expert.

He felt lonely and wished that his mother would sit with the rest of the family at the table.

One day, while he was still in elementary school, a thought occurred to him. Before his mother’s return, he dusted the thin meat slices in the fridge with flour and made “tonkatsu,” breaded deep-fried pork cutlet, by remembering how his mother had cooked it.

He prepared miso soup and rice, and dinner was ready.

When she came home and saw the dinner table all set, his mother came straight to him and hugged him.

“I was happy because she was not the type to show her expressions a lot,” he said.

Compared to his elder brother who did well academically and in sports, he was a child who did not have confidence in himself. Yet since that day, he developed a sense of security knowing that he “has a role in the family” and got hooked on cooking.

Now he spends time posting fuss-free dishes requiring few ingredients on social media. The recipes he comes up with are filled with his desire when young to make things easier for his mother and sit at the dinner table with her.

Tonkatsu made of thin slices of meat instead of the usual pork cutlet requires less oil and is economical to make. Its crispy texture makes it a perfect accompaniment to drinks as well.

Joe-san. is a cooking expert born in 1988. After graduating from university, he became a company worker before joining a food planning firm that creates recipes, among other pursuits. He struck out on his own in 2018 and now has 380,000 Twitter followers. He has written books including “Mendo na koto shinai umasa kiwami reshipi” (Fuss-free recipes that are the ultimate in umami).

2. Spread pork, make incisions at right angle to tendons. Sprinkle salt and pepper on one side, dust both sides with flour.

3. Dip pork slice in beaten egg mixed with water and bread with crumbs.

5. Serve cabbage and tomato on plate and also place tonkatsu.

Keep in mind to make incisions in the tendons so that the slices do not roll back when fried. The incisions may be made by a pair of kitchen scissors as well.

When slicing the cabbage, it will turn out nicer if 1 to 2 cabbage leaves are rolled up and cut from an end.