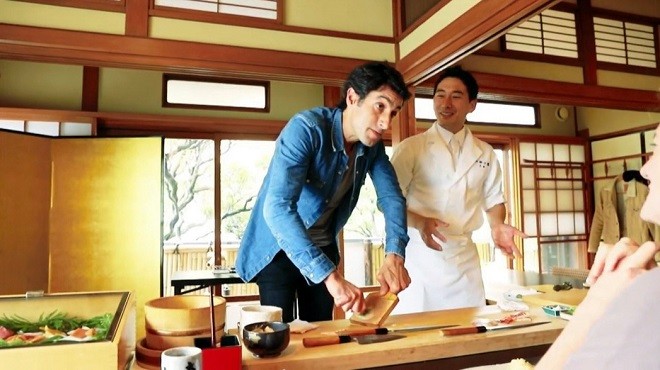 A foreign tourist joins a hands-on sushi-making session. (From a video provided by Tokyo Luxey Inc.)

Government tourism organizations are targeting wealthy visitors from abroad to reach a per capita spending target among tourists in Japan, but a number of hurdles remain.

The Japan Tourism Agency (JTA) has taken particular aim at those who spend at least 1 million yen ($7,200) during a single visit.

These travelers accounted for only 1 percent of all inbound tourists in the pre-pandemic year of 2019, but their spending made up 11.5 percent of the total, according to a survey conducted by the Japan National Tourism Organization (JNTO).

The government has set a goal of having foreign tourists spend 5 trillion yen ($35.6 billion) a year in Japan and increasing their per capita spending.

Although increasing numbers of tourists have been arriving in Japan since the relaxation of COVID-19 border controls in September, the JTA and JNTO want more “premium” visitors to enter.

The number of people with at least $1 million in assets is expected to grow by about 1.5 times worldwide over the five years from 2021, according to a private institution.

But Japan trails the United States and European countries in attracting wealthy tourists.

Japan ranked 36th in the list of overseas travel destinations for wealthy British tourists, a JNTO survey showed. Japan was also 13th for wealthy U.S. travelers, falling behind such countries as Italy and Thailand.

Wealthy tourists tend to prefer nature and cultural experiences, contributing to the preservation and development of cultures and industries, according to the JTA and JNTO.

Since October, the two government bodies have been inviting travel agencies catering to wealthy clients to join night tours guided by monks at Mount Koyasan in Wakayama Prefecture and visit luxury hotels in Kyoto and Nara prefectures.

The organizations are also considering improving the environment to receive private jets and large yachts to encourage the jet set to visit local areas.

Private investments are also under way.

“Wealthy tourists find value in something that is ultimately customized for them,” said President Chie Maeda.

She said it is essential to provide “storytellers” specializing in art, architecture and other fields to satisfy their needs.

However, she added: “The industry is lagging behind in personnel training. There are also not enough English speakers.”