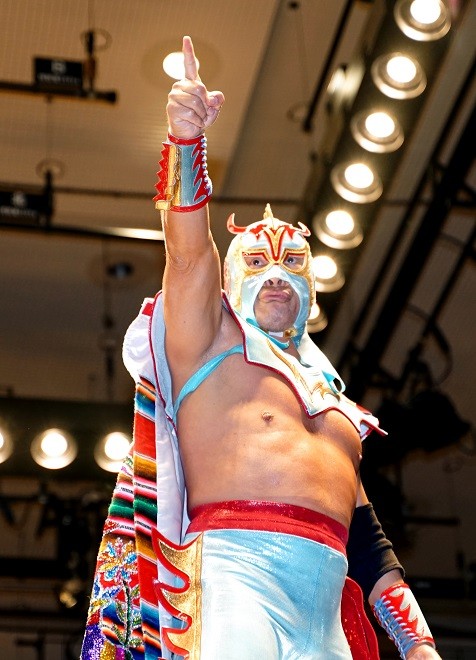 Despite being battered and bruised through thousands of bouts, Yoshihiro Asai continues to climb into the pro wrestling ring at the age of 55.

Asai made a name for himself as Ultimo Dragon, a masked wrestler, in Mexico.

To celebrate his 35th anniversary as a pro wrestler, Asai has returned to fight in his homeland, where his career was nearly derailed even before it started.

Born in Nagoya, Asai loved watching superheroes in “tokusatsu” special effects TV shows during his childhood. He was also fascinated with pro wrestler Antonio Inoki, and felt that a “superhero actually exists” in this world.

He trained himself physically and mentally in a track and field club at junior high, a judo team in high school and a live action program on the rooftop of a department store, where actors performed like superheroes.

At the age of 19, he applied to wrestle for New Japan Pro-Wrestling Co. but was rejected because of his “low height” of 170 centimeters.

After begging a company executive, Asai was allowed to “work” as an unpaid trainee. He was unable to compete in matches.

A turning point came when Asai met a Mexican involved in the wrestling business.

With no ring experience and lacking Spanish skills, Asai gathered up the courage to “make the first step and create the path.”

He debuted in the ring in Mexico just after his 20th birthday. He fought in ninja costumes on 400 occasions each year.

While gaining strength, Asai also learned, from his opponents, “entertainment factors,” such as how to fight and behave in a flashy fashion.

He kept adding his own twists to these elements, and he became a popular wrestler in Mexico. Asai won a champion belt a year after his debut.

His long career has taken him around the world, and he is now also performing in Japan.

Asai has also devoted himself to nurturing younger wrestlers.

He founded a wrestling school in Mexico in 1997 and started training Japanese students in 1999. Asai is now affectionately called “principal.”

“I want to give courage to people with problems by showing them my way of living,” he said. “That way, they can take a step forward.”