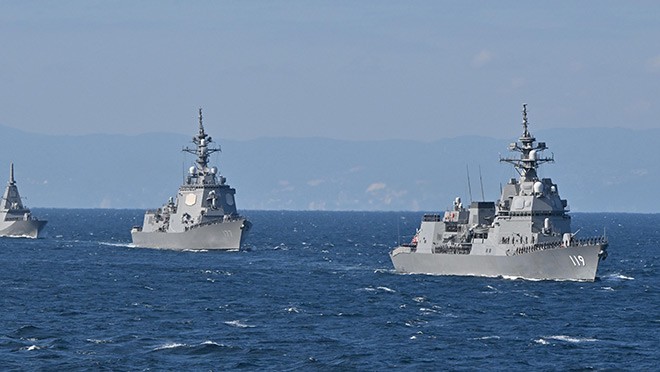 North Korea has been test-firing ballistic missiles at an unprecedented frequency.

China has been raising both the quality and quantity of its military capabilities while making clear its willingness to unilaterally change the status quo by force, if necessary.

It is no wonder that more Japanese are now uneasy about their own country’s security and willing to support an increase in Japan’s defense spending.

The administration of Prime Minister Fumio Kishida plans to make the final decisions on revisions to three key defense policy documents in one month.

The proposed changes could represent a radical shift from the highly restrictive defense policy Japan has maintained during the postwar period.

In working on changes to its security policy, the government should carefully assess the security situation surrounding Japan from a broad and long-term viewpoint without focusing exclusively on what is happening at the moment.

Let us ask one fundamental question to help put the security challenges facing the nation into perspective.

What does it mean exactly when a nation defends itself. What are the things that should be defended?

Territory? Independence? The governing system? Values such as freedom and democracy?

All these are important, of course. But the people should be the highest priority of the nation’s defense strategy. Japan’s defense policy should be focused, first and foremost, on protecting the social and economic well-being of all the people.

That may sound like a truism. But there are some bitter history lessons we should remember.

Prewar Japan placed supreme importance on preserving the national polity, which was structured around the emperor as the core of national identity.

The lives and livelihoods of the people were put on the back burner. Okinawa was used as a sacrifice to defend the mainland. One in every four residents in the prefecture was killed in the Battle of Okinawa.

Today’s Japan, which has developed as a democratic nation in the postwar period, has different values and priorities, of course.

Once a homeland becomes a battlefield, however, there would be countless numbers of victims among the entire population, men and women, young and old. It would not be easy to end a war. We are now witnessing the harsh realities of war in Ukraine.

Kishida pledged to “protect the people’s lives and livelihoods at all costs” in his policy speech.

But there is serious doubt whether the administration’s policy of pursuing a “fundamental enhancement of the nation’s defense capabilities,” which is narrowly focused on countering security threats with force, will really serve the core purpose of security policy.

The centerpiece of the government’s plan to beef up the nation’s defense capabilities is the idea of acquiring the ability to strike enemy bases.

This would mean possessing long-range missiles and using them to strike targets in enemy territory either as a pre-emptive attack against an enemy preparing to attack Japan or as a counterattack.

This proposal has been under consideration for several years. The government claims that such capabilities would serve as deterrence against potential enemy attacks. But that is far from guaranteed.

There is the concept of “security dilemma.” It is a situation in which efforts by a state to boost its own security by beefing up its military muscle prompt other nations to respond by bolstering their own, leading to a decrease rather than an increase in the original state’s security.

Japan has been upholding the principle of pursuing a strictly defensive security policy under Article 9 of the Constitution. It is Japan’s declaration that it will never be a security threat to other countries. This has provided reassurance to neighboring countries.

If Japan deviates from the principle it has upheld for nearly eight decades and acquires weapons systems that are capable of pre-emptive strikes, it will push itself into the security dilemma and contribute to accelerating the destabilization of the region.

If it places the highest security policy priority on protecting the people, the government should use all resources and wisdom available to ensure that the nation will not become embroiled in a war.

The Kishida administration’s diplomatic efforts to achieve this goal, which are as vital as enhancing the nation’s defense capabilities, have been far from sufficient.

The government has taken a series of steps to counter China’s military buildup, such as strengthening the security alliance with the United States, establishing the “Quad” four-nation framework for security cooperation involving the United States, Australia and India as well as Japan, and expanding security ties with Europe.

But it only recently started direct dialogue with China over security issues.

Japan’s economy has been barely growing for years while its population is aging rapidly. Low birthrates are causing the younger population to shrink.

These grim realities of the nation should be key considerations as the government tries to determine how the nation’s limited financial and human resources should be allocated to promote the happiness of the people. This challenge requires a delicate and complicated political balancing act.

Japan’s defense spending has been growing steadily over the past decade to reach some 5.4 trillion yen ($38.9 billion) in the initial budget for the current fiscal year. The Kishida administration is aiming to ramp up the defense budget sharply with an eye to doubling the amount in five years.

But the government is in hock for more than 1,000 trillion yen. Piling on additional new debt would only shift the burden to future generations. The question is how much increase in the tax burden on the public should be allowed to finance defense spending growth.

From the viewpoint of protecting the lives and livelihoods of the people, unreasonably large spending to prepare the nation for security emergencies at the expense of hurting the people’s living standards during peacetime simply does not make sense.

Bolstering defense capabilities through spending beyond the nation’s means would be unsustainable and may not actually increase the nation’s security over the long term.

We also need to think more carefully about what it means to defend the nation.

In addition to strengthening its defense capabilities, Japan should try to develop a comprehensive and balanced national power through efforts to raise its economic power, diplomatic power, information power, scientific and technological power and soft power, which means befriending other countries with its values and culture.

Such efforts should be tailored to the challenges that must be tackled in each area.

All these efforts require the people’s understanding, support and cooperation. To win over the public for its new defense policy, the government needs to demonstrate its solid commitment to protecting the people and carefully seeking to build a broad consensus through open debate.