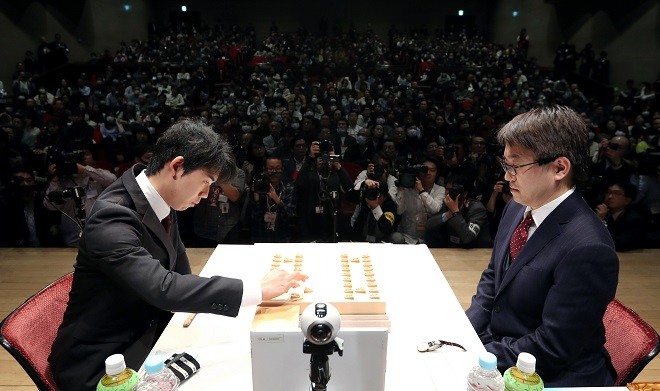 Yoshiharu Habu, right, and Sota Fujii pit their skills against each other in a shogi bout in Tokyo in February 2018. (Asahi Shimbun file photo)

What would happen if letters could transcend time and space, so that those penned in the past are delivered instantly to a post box in the future, or vice-versa?

Such a magical post box, functioning like a time machine, features in a 2006 American fantasy romance film titled “The Lake House.”

A female doctor, living in a lakeside house in 2006, falls for a male architect who occupied the property two years before. They correspond through letters that arrive in the post box.

The man writes that he wants to get together with her. “It won’t be tomorrow for you. You’re going to have to wait two years,” she replies. Despite their mutual longing, they never get to meet. I remember feeling their frustrations and heartaches as I watched this movie.

Unlike this hapless couple, two real-life Japanese professional shogi stars seem to have lucked out.

Yoshiharu Habu, 52, a 9-dan pro who is considered to be the all-time great in shogi history, won the right to challenge shogi prodigy Sota Fujii, 20, who holds the title of Osho.

This will be their first faceoff in a title series.

“We were able to avert continuing to miss each other,” noted Habu of this cross-generational contest: He is 32 years older than Fujii.

As a shogi fan, I am delighted by this outcome that makes me think of two star-crossed lovers finally encountering each other.

Whom am I going to root for? Habu’s losses piled up last year, but he made an incredible comeback this season.

Fujii, on the other hand, has a bout today in the Ryuo title championship series he is trying to defend. He has been a formidable force since he became a five-crown title holder.

In the shogi community, capturing a title is considered difficult for players past the age of 50. But Kozo Masuda (1918-1991), a veritable Showa Era (1926-1989) shogi genius, kept challenging new heights, noting, “It’s fun to try to conquer the world, wondering, ‘What are today’s youngsters like?’”

The history of shogi is strewn with innumerable great masters.

The best-of-seven Osho title series will kick off in January. Just imagining how it will play out fills me with happy anticipation.

I would dearly love to watch masterful games that will make shogi players of the future grunt and murmur as they study generations of game records.