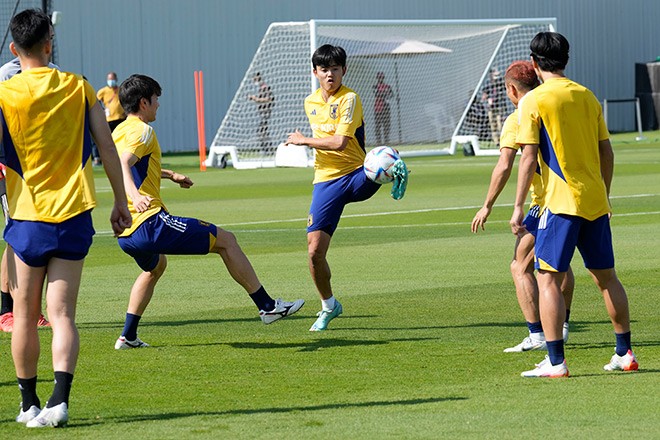 Players warm up during a training session of Japan national team in Doha, Qatar, on Nov. 25. (AP Photo)

DOHA, Qatar (AP) — How big was Japan's 2-1 upset of Germany in the opening round of the World Cup?

Newspapers in Japan used the term “Daikimboshi” from sumo wrestling to describe the magnitude of the surprise: when a low-ranked wrestler overpowers a grand champion.

The victory has also been compared to Japan's 34-32 upset of powerful South Africa in the 2015 rugby World Cup in England.

Japan was the underdog against four-time champion Germany, but it will be a strong favorite in its next Group E match against Costa Rica, where a victory could move Japan into the knockout stage with a game to spare.

A loss by Costa Rica on Sunday would eliminate it from advancing. Costa Rica faces Germany in its final match and Japan goes against Spain.

Costa Rica is reeling from a 7-0 thrashing against Spain in its opener, and it's anyone's guess how the Ticos will respond. With a population of just over 5 million, the tiny Central American country is appearing in its sixth World Cup. It reached the quarterfinals in 2014 in Brazil.

Japan has never reached the quarterfinals at a World Cup, and that's the aim this time. This is Japan’s seventh straight appearance, and it has reached the round of 16 on three occasions, including in Russia in 2018. It lost 3-2 in stoppage time to Belgium after leading 2-0.

It was eliminated by Paraguay on penalties in 2010, and lost to Turkey 1-0 in 2002 when the country co-hosted the event with South Korea.

Substitutes Ritsu Doan and Takuma Asano scored late goals against Germany — they both play in Germany's Bundesliga — to lead Japan to the upset. Asano got the winner in the 83rd minute, squeezing the ball behind German goalkeeper Manuel Neuer from a very sharp angle.

Costa Rica was overwhelmed by Spain with only 28% of the possession. It would also face the same problem against Japan, which is able to hold the ball for long spells, and is also a quick, counterattacking threat.

The Ticos will have to do much more against Japan.