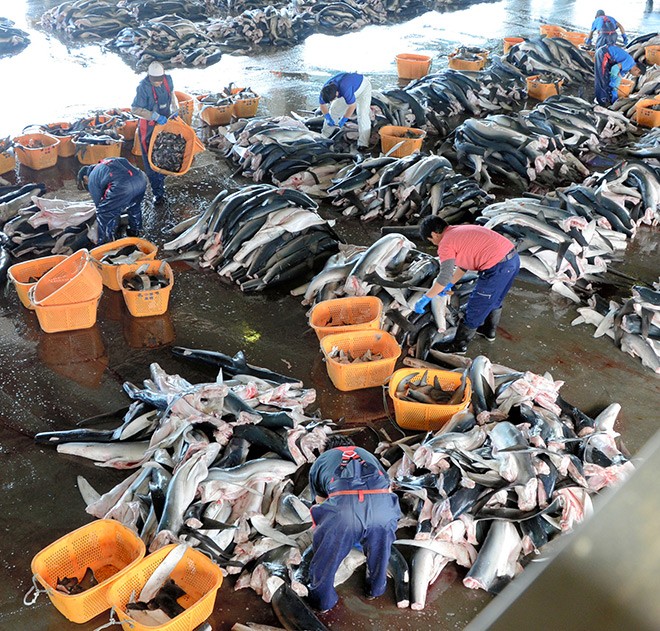 Workers sever fins of blue sharks at a port in Kesennuma, Miyagi Prefecture. The area accounts for the nation’s largest catch of the species. (Asahi Shimbun file photo)

A landmark decision to regulate the trade in sharks for shark fin soup is bound to have ramifications for Japan, a key exporting nation.

Blue sharks were among 54 species of requiem sharks that moved to Appendix II listing at the conference in Panama of the Convention on International Trade in Endangered Species of Wild Fauna and Flora, known by its initials as CITES or the Washington Convention,

The CITES regulates international trade of endangered animals and plants.

Under Appendix II listing, which was enacted on Nov. 25, commercial trade is not banned, but a permit by the government is required for export.

They are caught mainly for their fins, a coveted delicacy, and a large amount is exported to China and elsewhere. Their meat is used as an ingredient of boiled fish paste.

When a catch lands at Japanese ports after the fish were caught in open waters, it means the sharks are effectively “imported” to Japan.

According to the Japanese Fisheries Agency, it will be difficult for authorities in most cases to issue an import permit in time in such cases.

If Japan endorses the CITES’s decision to place the 54 species under Appendix II, it will be practically impossible to catch blue sharks in the open sea.

The Kesennuma fisheries cooperative in Miyagi Prefecture, which accounts for the nation’s largest catch of blue sharks, said that 70-80 percent of the species are caught in open waters.

Blue sharks were moved to Appendix II listing on grounds they were difficult to distinguish from other shark species threatened with extinction.

The Japanese government is expected to suspend enactment of the protection so as not to be bound by the CITES decision.

“There is plenty of scientific data (showing that blue sharks are not endangered) and the species has a healthy population,” a Fisheries Agency official said, questioning the soundness of the Appendix II listing.

The government took the same step with respect to mackerel sharks, which were placed under Appendix II listing in 2019.

But Japanese fishermen will still need to obtain an export permit for sharks if the country importing them from Japan honors the CITES’s latest move, raising concerns about future trade of the fish.

“The price of sharks for export could decline as it will take longer than before to export sharks due to the extra steps needed,” an official with the Kesennuma fisheries cooperative said.