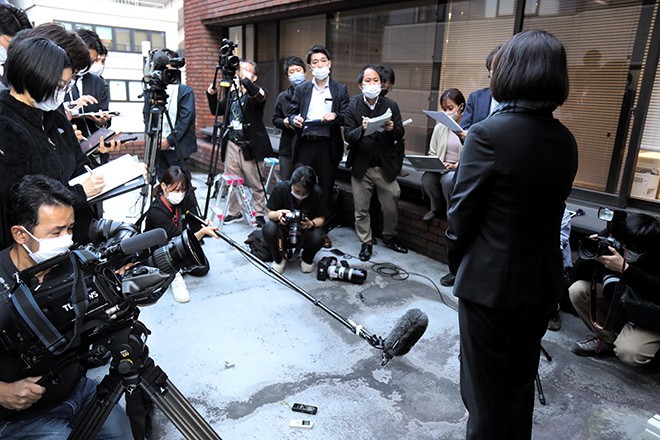 The scandal over the Morimoto Gakuen school operator, which compromised the foundations of democracy, should not be dismissed and forgotten as something of the past.

The truth still remains hidden in the shadows.

The Osaka District Court has dismissed a compensation claim by the widow of Toshio Akagi, a Finance Ministry employee who killed himself in 2018 after being ordered to falsify official documents.

Akagi, who was 54, worked at the ministry’s Kinki Local Finance Bureau. His widow, Masako, demanded damages from Nobuhisa Sagawa, then director-general of the ministry’s Financial Bureau.

A probe by the Finance Ministry said Sagawa “set the overall direction for the falsifications.”

Masako sued the government and Sagawa in 2020, hoping, in her words, to “know the truth.”

But the government abruptly made a cognovit, or acknowledged the plaintiff’s entire claim, late last year, ending the court proceedings before any substantial hearings took place.

We cannot but feel anger again at the government’s stance. The government dashed opportunities for examination of witnesses involved in the case and also refused to exercise the legally stipulated right to demand compensation from Sagawa.

The court on Nov. 25 rejected Masako’s claim by citing a Supreme Court precedent saying that the liability to pay damages for illegal acts committed by national public servants as part of their duties falls on the government but not on individual public servants.

However, a viable legal theory says that norm need not be applied to provide protection for public servants in serious cases that could amount to intentional abuse of authority.

The falsifications of official documents were started on Sagawa’s initiative after former Prime Minister Shinzo Abe told the Diet in 2017 that he would “step down both as prime minister and as lawmaker” if he or his wife, Akie, were ever involved in the case.

During the trial procedures, Masako appeared in court in person after Abe died in July. She argued that Akie and Sagawa should come forward to reveal what occurred.

Akie was honorary principal of an elementary school that was to be opened by Moritomo Gakuen, which had acquired a state-owned plot of land at a discount of more than 800 million yen ($5.76 million) from the appraised value.

Sagawa cited fear of criminal prosecution in refusing to testify before the Diet when he was summoned as a sworn witness. He has remained silent even after the Osaka District Public Prosecutors Office ended its investigation into the matter.

With no prospect in sight that the case will ever be elucidated in court, the administration of Prime Minister Fumio Kishida and the Diet have a duty to respond to Masako’s plea.

During a Diet session on Nov. 25, Finance Minister Shunichi Suzuki declined to comment on the court decision, saying the government is not party to the case.

In responding to a question later in the session, Kishida only said, “I continued to instruct concerned parties, including the Finance Ministry, to do everything to fulfill their accountability.”

When he was pursuing the post of prime minister, Kishida maintained that “public trust, which is the foundation of politics, has fallen apart, bringing Japan’s democracy into a crisis.”

We are left to wonder where his original commitment to reform has gone.

In the Moritomo case, official documents were boldly rigged and scrapped, and false responses were repeatedly given in the Diet over the scandal.

That seriously hurt functions for the oversight of administration. The Diet, which represents the public, has a duty to try to reinstate those functions through fact-finding efforts.

The administration and the Diet should keep in mind that Masako’s repeated plea that she wants to know the truth is shared by many members of the public.