Only 16% of population has taken vaccine for Omicron variant 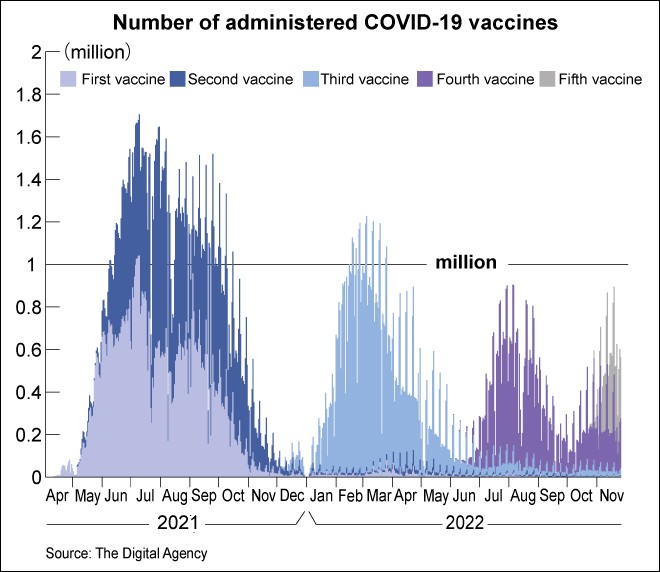 The public has largely ignored the government’s calls for them to receive vaccine shots to protect against the Omicron variant of the novel coronavirus and a possible eighth wave of infections.

Administration of the vaccine targeted at the Omicron variant started on Sept. 20.

On Oct. 21, the government shortened the minimum interval between vaccine shots from five months to three months to allow more people to receive the shots within this year.

But only 15.5 percent of the entire population has taken the latest vaccine designed to tackle the Omicron variant, well short of the government’s goal.

Prime Minister Fumio Kishida tried to set an example by receiving the Omicron shot at a mass vaccination center run by the Self-Defense Forces.

“Winter is the season when important events, such as entrance exams and homecoming trips, take place,” he told reporters on Nov. 25. “I sincerely hope that everyone receives the COVID-19 vaccine with a positive mindset to protect their loved ones and themselves.”

The government has promoted the vaccine program on TV commercials and through social media.

It set a target of making arrangements with local governments to administer more than 1 million doses of the vaccine per day in October and November.

At the end of October, the arrangements made could provide up to 1.68 million doses per day.

However, the daily average of administered doses reached only around 600,000 in one week in mid-November. Two weeks earlier, the figure was around 440,000.

But even if 1 million doses are administered every day from now, around 56 million people, or only half of the eligible people aged 12 or older, will have had the vaccine by the end of this year.

Ninety percent of people over 65 have each received three vaccine shots.

Based on this data, if 80 percent of these elderly people receive Omicron shots this year, they will account for most of the 56 million vaccine recipients.

That could mean that only 35 percent of the working population will have received the vaccine by the end of December.

In a survey conducted by the Tokyo metropolitan government in October on 1,000 people in their 20s to 70s, 58 percent of 123 respondents who had taken two vaccine shots said they will “never” or “probably never” receive the third dose.

The ratio rose to 72 percent if those who said they “don’t know” if they will get the third dose are included.

Among those against or unsure about getting the third dose, the largest portion, or 35 percent, cited their experience of suffering side effects from previous shots.

Thirty-one percent said they “doubt the effects of the vaccine.”

Hirotada Hirose, a professor emeritus of disaster risk studies at Tokyo Woman’s Christian University, said, “Communicating accurate and detailed information on the effects and side effects of the vaccine and correcting misinformation found in places such as the internet will convince people to take the vaccine.”