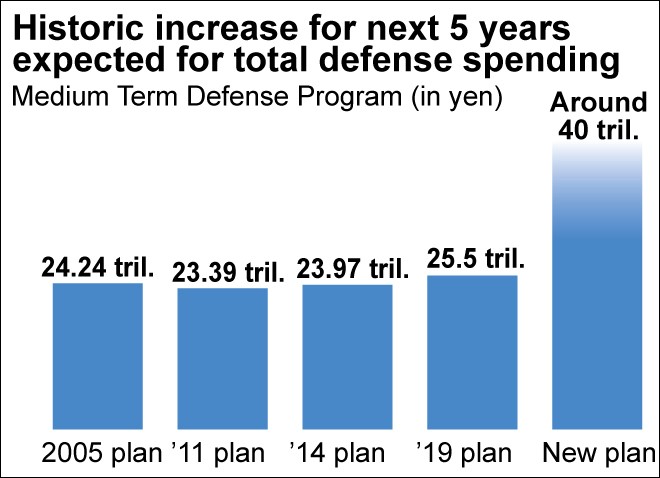 The government wants to drastically bolster the nation’s defense capabilities by raising total defense spending to around 40 trillion yen ($289 billion) in its five-year defense budget through fiscal 2027.

It hopes to fund the increase by possibly raising taxes.

“Defense spending needs to be at least 40 trillion yen,” a government official said. “We are aiming for the total security-related expenditures--including infrastructure development with other ministries and agencies, along with research and development--to account for more than 2 percent of the GDP in the next five years.”

The Defense Ministry is seeking around 48 trillion yen to fund more defense capabilities, according to multiple government officials.

However, the Finance Ministry wants to curtail the budget to the lower 30 trillion-yen range due to limited financial resources, the sources said.

“Strengthening defense capabilities is the goal, but the burden on the public should be as small as possible,” said Finance Minister Shunichi Suzuki, who oversees assessing budgets.

The government aims to revise the current program by the end of this year to increase spending by around 15 trillion yen, with adjustments being made to settle the spending at around 40 trillion yen.

The government sets total defense spending for the next five years in its Medium Term Defense Program to proceed with purchasing equipment for the Self-Defense Forces.

“How much of the total amount of the next Medium Term Defense Program can be secured is extremely important,” said Defense Minister Yasukazu Hamada.

The current plan in use that began in fiscal 2019 was set at around 25.5 trillion yen.

This time, the Defense Ministry requested various budgets such as for developing multiple missile systems, including securing counterattack capabilities; satellite launches; and measures to deal with large-scale natural disasters at SDF facilities across the nation.

Suzuki said he sees the simultaneous development of multiple missile systems and a large-scale repair plan for old facilities as difficult to achieve.

The government is entering into full-scale coordination with the ruling parties regarding the plan.

The question is how the government could secure such massive financial resources. A government panel of experts recommended on Nov. 22 that “broad taxes would be needed to share the burden.”

The government doesn't seem interested in working to reform spending before asking the public to pay higher taxes.

The only major measure the government is considering is to prompt the independent administrative agencies that operate the national and public hospitals return the 150 billion yen in reserves increased by the COVID-19 pandemic.

However, the health ministry is reportedly reluctant to do so, saying it wants to use the money to improve facilities.

When 19 trillion yen was needed to finance reconstruction after the Great East Japan Earthquake and tsunami in 2011, the government raised 8.5 trillion yen by increasing taxes, along with cutting spending, such as the salaries of Diet members and civil servants.

“Such cutbacks in spending are not on the horizon right now,” said a government official.

Unlike financing reconstruction, defense spending is a permanent expenditure. Once it is increased, it is difficult to drastically reduce it again.

Even if government bonds are used to temporarily finance defense spending, stable financial resources through tax increases are indispensable.

The corporate tax is seen as a likely strong financial source. If a 10 percent add-on is applied like after the 2011 disaster, around 7 trillion yen in tax revenues could be secured in five years.

Imposing greater taxes on the wealthy and raising taxes on cigarettes could also be a possibility.

Raising the income tax will be inevitable if the increase in defense spending becomes larger.

Opinion polls show many people are calling for spending reforms rather than tax hikes to finance defense spending.

The Defense Ministry must demonstrate the efficiency of its projects to gain public understanding for tax hikes, and the Finance Ministry must rearrange the budgets.

(This article was written by Kuniaki Nishio and Naoki Matsuyama.)