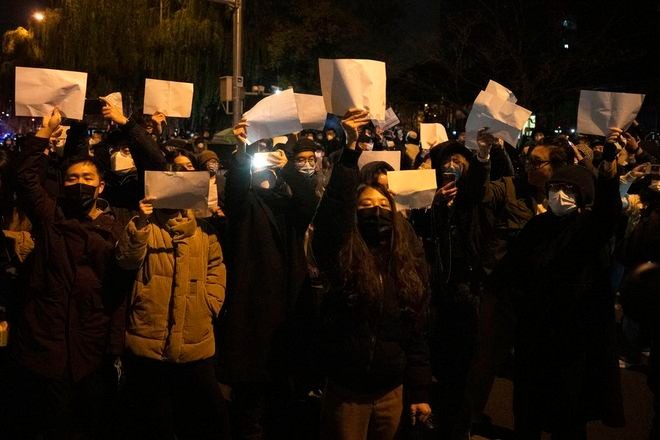 Protesters hold up blank sheets of white paper and chant slogans as they march in protest in Beijing on Nov. 27. (AP Photo)

When I say the words “blank sheets of white paper,” I’m not talking about Prime Minister Fumio Kishida and his flawed receipts.

Instead, I’m talking about the numerous Chinese citizens who are reportedly protesting the government while brandishing blank sheets of white paper. It appears their exasperation with Beijing's uncompromising COVID-19 lockdown measures has finally erupted.

This is certainly an anomaly, given the ruthlessness with which speech is suppressed in China. I am actually stunned.

But why blank sheets of white paper? Is it to avoid being arrested by not writing any specific messages of dissent? I understand that there was a similar protest movement in Russia against the country's invasion of Ukraine.

In China, any online comment that directly criticizes the government is immediately deleted, but so are posts of only mild ridicule. Any argument that is inconvenient for the authorities, no matter how valid, is simply negated.

The blank sheets of white paper appear to imply the reality of Beijing's absolute refusal to allow dissent.

Red is the symbolic color of the Chinese Communist Party. During the era of the Republic of China from 1912 to 1949, the Communist Party's political repression was called the “White Terror.”

For Beijing, which has been extremely wary about the “color revolutions”--or pro-democracy movements--in Eastern Europe and the Middle East, it must be ironic indeed to have to face a “white” protest movement now.

I have seen footage of Chinese street demonstrators calling on President Xi Jinping to “step down.” Are Xi’s faithful subordinates able to convey such a scene accurately to their boss? I can only pray the reports they send to Xi will not be blank sheets of paper.

I am trying to see the “hearts” of China’s angry protesters through the white paper they are holding up high.