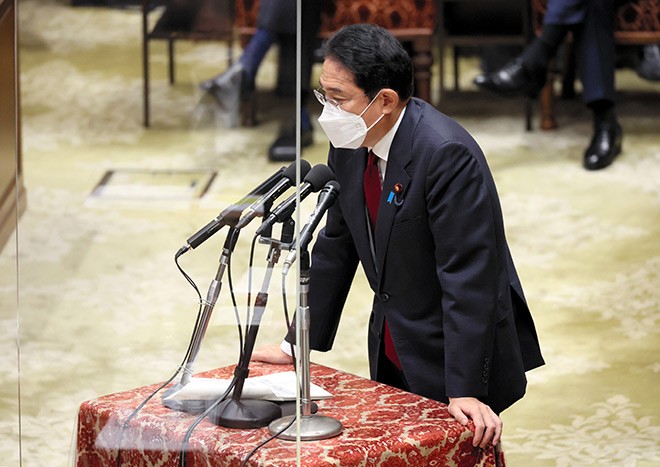 Prime Minister Fumio Kishida responds to a question at the Nov. 28 session of the Lower House Budget Committee. (Tsubasa Setoguchi)

The ruling coalition compromised with opposition camps regarding government-drafted legislation to ban donations from the Unification Church and other organizations but the move did not cover donors under the "mind control" of the church.

Ruling coalition officials said the wording requiring organizations to take into consideration three factors when soliciting donations was a compromise step toward the opposition, and some indicated that it would be impossible to go any further.

But opposition party lawmakers said on Nov. 28 that the proposal as now written would not be effective in stopping donations and called for further discussions. They said another step would be needed.

Government officials presented a draft bill to ruling coalition officials that only included wording requiring religious organizations, such as the one formally known as the Family Federation for World Peace and Unification, to “take into consideration” that they do not restrain the free will of members and make it difficult for them to make appropriate judgments about donations.

The organizations will also be required to consider that the lives of the spouse and relatives of members are not made more strained and that they make clear that they are soliciting donations.

Opposition party lawmakers wanted stronger wording banning such mind control donations because of their concerns that individuals brainwashed by religious and other organizations would be unable to make rational decisions about donations or ask that the money be returned because the lives of family members had become more difficult.

But Taro Kono, the state minister in charge of consumer affairs, said it would be difficult to infringe on the right of individuals to decide how to handle their own assets.

Prime Minister Fumio Kishida’s Cabinet plans to approve the draft legislation as early as Dec. 1 and is moving to pass the bill in the current extraordinary Diet session.

The opposition will likely press Kishida to make further compromises.

During the Nov. 28 Lower House Budget Committee session, Kishida provided details about meeting with three individuals for about 90 minutes to hear about how their lives were adversely affected because family members belonged to the Unification Church.

“I heard directly about the appalling incidents they had to endure due to the donations, such as being isolated from others as well as suffering from domestic violence,” Kishida said.

He added that the proposed legislation would provide support to those who suffered similar damages.

The draft legislation lays out seven examples of acts in soliciting donations that would be banned, such as demanding donations or purchases to ward off bad luck or misfortune, or refusing to let a prospective donor go home.

Religious and other corporations that ignored orders to stop banned solicitations of donations would face maximum penalties of one year imprisonment or a fine of 1 million yen ($7,200).

The return of donated money would also be possible if the solicitation was one of six banned.

The provision to allow children and a spouse to rescind donations was included because of concerns that members brainwashed by a religious organization would be unlikely to realize their actions were causing financial hardship for family members and would not seek to rescind the donations themselves.

(This article was written by Mihoko Terada and Hiroki Koizumi.)