EDITORIAL: Plan to hike defense spending to 2% of GDP was a done deal 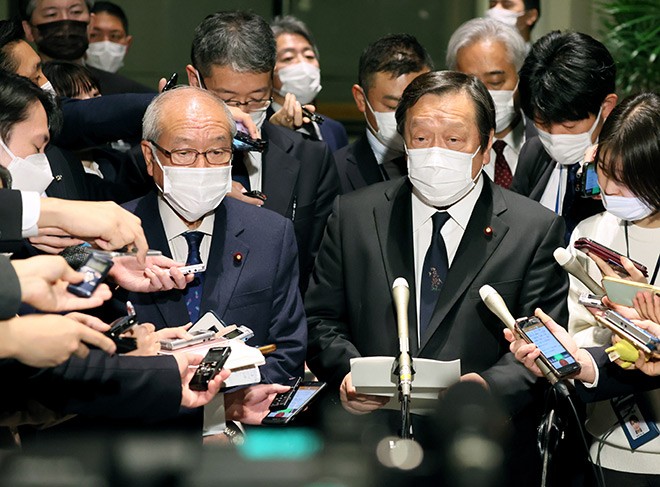 We were led to believe that Prime Minister Fumio Kishida's proposed "fundamental reinforcement of the nation's defense capability" would be presented as a package deal entailing the program's content, budget and funding sources.

But the budget amount was announced on Nov. 28, even though no specific explanations have been offered so far about the purpose of this program, nor has any discussion begun yet of the funding sources.

We can only conclude that the scale of the defense budget was a done deal.

Kishida on Nov. 28 instructed his defense and finance ministers to ensure that defense spending, combined with related projects, will reach 2 percent of gross domestic product by fiscal 2027.

At 2 percent of GDP, the amount will be 11 trillion yen, which is a hefty increase that can amply cover additional outlays for defense-related research and development, revamping public infrastructure such as ports and harbors, the Japan Coast Guard budget and pension payouts.

The 2 percent figure is the goal of national defense budgets of NATO member nations. For the Lower House election last year, the ruling Liberal Democratic Party's campaign platform proposed a plan to reinforce the nation's defense capability with this NATO number in mind.

And in May this year, the LDP again mentioned 2 percent in its proposal to the government regarding the latter's planned revision of its three major defense-related documents by the end of this year.

But Japan and NATO nations differ in security environment and history, as well as in budgetary system.

We have repeatedly asserted in our editorials that while we appreciate the need for a steady buildup of Japan's defense capability, our basic principle is that any necessary defense budget increase must be carefully examined in terms of cost-effectiveness.

In the meantime, Kishida remained insincere by avoiding any discussion of the level of defense buildup while "promising" to clarify everything with a package deal on the program's content, budget and funding sources.

He ultimately confirmed the "2 percent of GDP" formula.

But as for deciding on a massive defense budget increase that presupposes the introduction of long-range missiles, his timing was all wrong because there is still no official decision on whether Japan should possess the capability to pre-emptively strike enemy bases. Kishida should have waited until the decision was made.

Since Kishida's Nov. 28 directive to his defense and finance ministers applied only to the budget level in fiscal 2027, nothing was said of the total budget amount for the five years from the next fiscal year.

On the other hand, he said utmost efforts must be made to review non-defense spending plans because it is vital to secure stable funding sources. For this, he also said measures will be decided with regard to both revenue and expenditures, which effectively meant tax hikes are being considered.

The government-appointed Advisory Panel to Comprehensively Discuss Defense Capabilities as National Strength spelled out in its latest report that a wide range of taxation items are needed for the public to shoulder the burden.

A loud chorus has erupted already from within the LDP, opposing tax hikes and calling for the issuance of government bonds. But with the national debt currently exceeding 1 quadrillion yen, it is beyond irresponsible to simply dump all the burden on future generations.

That said, however, people must never be overburdened into poverty. Every tax hike must have the understanding and cooperation of citizens.

But that seems highly doubtful, given the current administration's habit of putting off explanations.