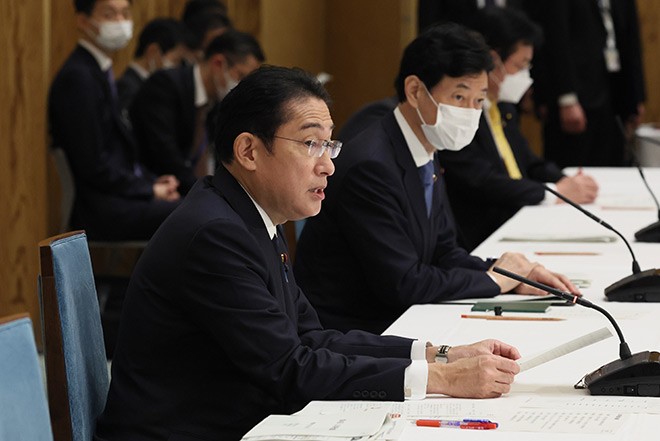 Businesses will be required to pay for their CO2 emissions, the government announced on Nov. 29 as it presented details for a carbon pricing system, which combines a surcharge and emissions trading plan.

During a meeting of the GX (Green Transformation) Implementation Council, which discusses initiatives to achieve decarbonization, members approved the industry ministry’s idea for the carbon pricing system.

The meeting was held at the prime minister’s office in Tokyo.

However, the government also decided to put off introducing a full-scale carbon tax. The tax is a levy companies pay in proportion to their CO2 emissions.

The carbon pricing system seeks to help achieve a carbon-neutral society. The government plans to use the revenue it will collect from the system to fund a 20 trillion yen ($140 billion) policy aimed at encouraging businesses to invest in decarbonization.

The surcharge is a system in which the government will require businesses, including importers of fossil fuels such as coal or oil, to pay in proportion to their CO2 emissions.

Other businesses and households also emit CO2, but as it is difficult to gauge their exact CO2 emissions, the government will require companies--including fossil fuel importers such as oil companies, trading houses and electricity and gas companies--to pay the surcharge.

Consumers may have to bear the cost of the surcharge, however, if such companies pass it on through the prices of their products or services.

Emissions trading is a system in which businesses trade CO2 emissions among themselves.

A trial run started in September.

Businesses are free to choose to participate in the trial, with there being no fine for not participating.

The government will phase the trial into a system in which businesses will purchase emission allowances from the government, just like they do in European countries.

It is expected that the government will initially require electricity companies, which operate many thermal power plants, to participate in the emissions trading system.

The government will present the detailed starting period of the new carbon pricing system at a council meeting next month.

Because of the government’s consideration of the impacts of the system on business operations, the burden for companies under the new system will be initially light before gradually increasing.

The government expects that businesses will ramp up investments in decarbonization if they anticipate heavier burdens under the system.

The industry ministry estimates that public and private sector investments of more than 150 trillion yen will be needed over the next 10 years to achieve decarbonization.

Of the 150 trillion yen in investments required, the ministry plans to secure 20 trillion yen by issuing GX economy transition bonds in or after fiscal 2023.

The aim is to help businesses invest in green projects and encourage them to invest in decarbonization.

The government plans to use the income from the carbon pricing system, such as earnings from the surcharges and the emissions trading, to repay the GX bonds.