Crown Prince Fumihito speaks at a news conference to mark his 57th birthday. (Provided by the Imperial Household Agency) 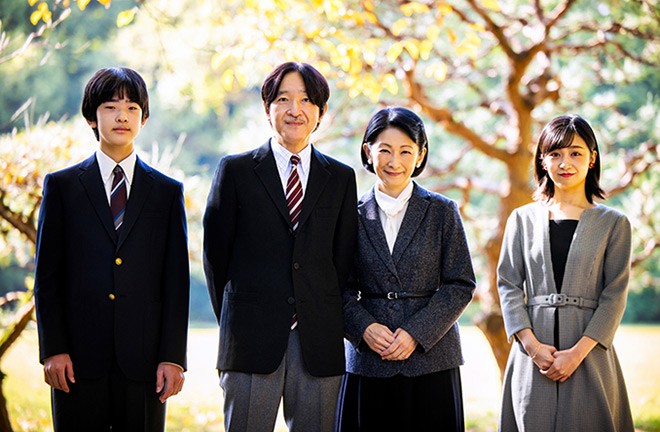 Crown Prince Fumihito, second from left, enjoys spending time at the Akasaka Estate with his wife, Crown Princess Kiko, his second daughter, Princess Kako, and his only son, Prince Hisahito, on Nov. 6. (Provided by the Imperial Household Agency)

Crown Prince Fumihito, who turned 57 on Nov. 30, expressed support for information from the imperial family to be disseminated in a more timely and open manner to the public, possibly even on social media.

At a news conference prior to his birthday, Fumihito said that information “will be communicated more straightforwardly” if not released in an “indirect way,” as is the current practice through the Imperial Household Agency.

“Consideration is necessary” for the medium to disseminate information, including whether the agency’s website is the appropriate place, the crown prince said.

The agency is planning to make new arrangements from the next fiscal year for the release of information on the royal family.

Its ideas include communicating such information on social media platforms or renovating the agency’s website and increasing personnel to do these tasks.

During the news conference, Fumihito said that it is necessary to disseminate accurate information about the imperial family in a timely manner.

He also said that enabling people to know where they can find accurate information about the family is important.

When asked about the possibility of imperial family members opening individual social media accounts to post information, he said, “I probably won’t do that, but I absolutely believe that there is such a possibility.”

At the news conference last year to mark his birthday, Fumihito indicated that responses may be made against media reports regarding the imperial family that are not based on facts.

At the time, he said that “certain standards” are needed regarding such reports to determine when a response is warranted.

This year, he said that establishing such standards is an issue for which consideration will continue.

He revealed that when he once tried to determine how much inaccurate information was included in a published article on the imperial family, he found that such a task “requires considerable effort.”

He added that this experience taught him the difficulty of establishing certain standards and issuing a response against a media report based on them.

He also said that he sometimes talks briefly with his parents, Emperor Emeritus Akihito and Empress Emerita Michiko, when they go for a stroll at the Akasaka Estate, for example.

He said, “Because they are nearly 90, I hope they spend their days looking after their health.”

He also said that he isn’t currently discussing anything with his second daughter, Princess Kako, regarding her marriage.

He added that he encourages his son, Prince Hisahito, to visit various places across Japan and experience their cultures firsthand, or to learn Japanese history through books or other medium.

He refrained from commenting on his eldest daughter, Mako, who married Kei Komuro one year ago, to respect her wishes that she doesn’t want him to speak about her publicly.

(This article was written by Akiko Tada and Ryujiro Komatsu.)