Plaintiffs and their supporters on Nov. 30 welcome the Tokyo District Court ruling, which in part said the lack of a legal system that recognizes same-sex couples as a family is in a state of unconstitutionality. (Video by Tetsuro Takehana) 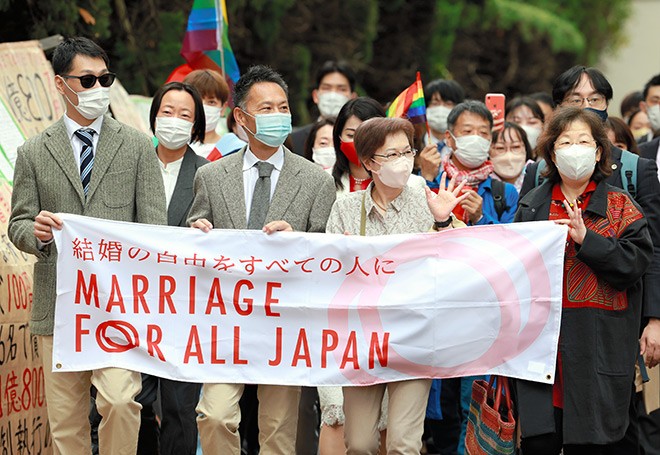 The plaintiffs and their supporters enter the Tokyo District Court on Nov. 30. (Tetsuro Takehana)

The Tokyo District Court ruled on Nov. 30 that the nation's ban on same-sex marriages is constitutional and denied the plaintiffs compensation, dealing a fresh blow to LGBT rights.

But Presiding Judge Momoko Ikehara also said that the lack of a legal system that recognizes same-sex couples as a family is a “serious threat to and violation for gay people” and is in a state of unconstitutionality regarding the second paragraph of Article 24 of the Constitution.

Article 24 states that marriage shall be based on the “mutual consent of both sexes.”

The plaintiffs in the suit are eight people of same-sex couples living in Tokyo and other areas, ranging in age from their 30s to 60s.

They argued that the Civil Law and Family Register Law that do not recognize same-sex marriages violates the Constitution's Article 14, which stipulates equality under the law, and Article 24, which guarantees the freedom of marriage.

Based on the argument, they sought compensation from the central government for its failure to take legal measures to deal with the problem.

Others have filed similar lawsuits in four other district courts: Sapporo, Nagoya, Osaka and Fukuoka.

This was the third ruling among them, but the second to rule that the ban is constitutional.

The Sapporo District Court ruled in March 2021 that legal provisions against same-sex couples are a clear violation of Article 14 and prevent them from enjoying the legal benefits of marriage.

But in June this year, the Osaka District Court ruled that the ban is constitutional.

The Osaka ruling said inequality for same-sex couples has been “resolved and mitigated to an appreciable extent” through other provisions of the Civil Law, such as contracts and wills.