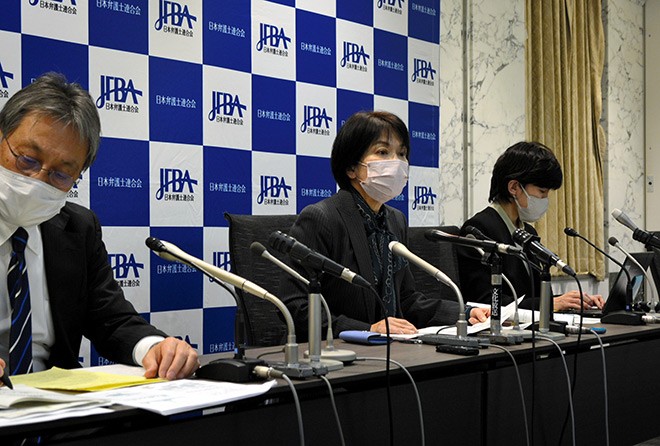 Naoko Yoshino, a vice president of the Japan Federation of Bar Associations, center, and other lawyers hold a news conference in Tokyo’s Chiyoda Ward on Nov. 29 about victims of the Unification Church.

More than 40 percent of Unification Church victims have each lost 10 million yen ($72,000) or more to the religious organization, the Japan Federation of Bar Association said on Nov. 29.

It said 6 percent of the victims reported damages of 100 million yen or more.

The JFBA since Sept. 5 has held 309 consultations with victims of “reikan shoho,” or spiritual sales, conducted by the church, now formally called the Family Federation for World Peace and Unification.

Under the method, the church sells goods or services at exorbitant prices often for supposed supernatural benefits, such as preventing bad luck or soothing the souls of deceased loved ones.

The JFBA said that 624 complaints about spiritual sales had been reported around Japan as of Oct. 24, and lawyers in Tokyo handled 389 of the cases.

Of these, 309 cases were related to the Unification Church, which has also come under fire for pressing its followers to make huge donations.

In 101 cases, or 33 percent of spiritual sales cases involving the church, the amount of damage was “between 1 million yen and 10 million yen.”

The JFBA also released statements from the victims.

“I was taken to a public notary office by a religious group follower and was made to draw up a document stating, ‘I donated the money on my own free will,’” one person said.

Another victim said: “I married a Korean man at a joint wedding ceremony. I lived in South Korea, but my husband was extremely violent, and I returned to Japan two years later. I tried to bring my child home with me, but he took my child away from me.”

One victim said, “I was forced to participate in an election campaign.”

The JFBA has also held consultations with family members of church followers.

“My mother is a follower,” the JFBA quoted one of them as saying. “She borrowed money to donate to the church by taking out a mortgage on our house and land. We could not repay the debt, so we had to sell the house and land.”

Another family member said, “When I consulted the police (about a relative’s donations to the church), they only told me to talk to my family about it.”

The JFBA plans to gather more information on the damages and compile a proposal on how relief should be provided.

Consultations will be accepted until Dec. 26 through the toll-free telephone number 0120-254-992 as well as online.

The Unification Church has come under heavy criticism since former Prime Minister Shinzo Abe was fatally shot in July by a suspect whose mother is a member of the organization.

Her huge donations to the group, said to have totaled more than 100 million yen, led to the financial ruin of the family, and the suspect targeted Abe over his connections to the church, investigators said.

The government is now trying to compile legislation to support victims of the Unification Church.