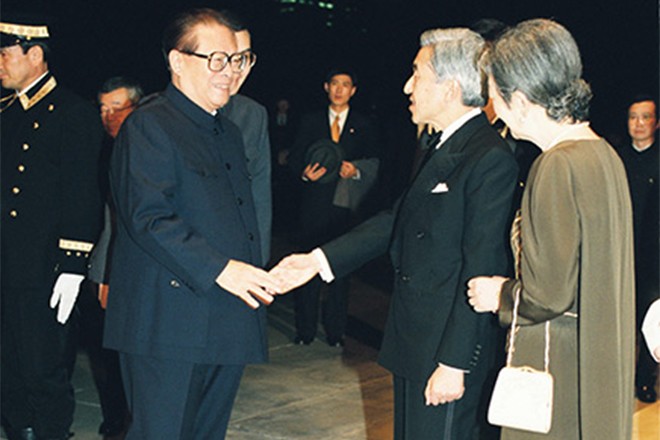 “Toki-iro” (pale gentle pink) is named after the color of the beautiful wings of the “toki” Japanese crested ibis.

The bird was mentioned in “Nihon Shoki” (The Chronicles of Japan), compiled in 720, under a graceful name written in three kanji characters denoting “peach,” “flower” and “bird.”

Toki could be seen all over Japan until the Edo Period (1603-1867). They then became victims of overhunting during the Meiji Era (1868-1912), and the species was driven to the brink of extinction.

In 2003, the last surviving domestic-born Japanese crested ibis, named Kin, died at the age of 36.

Today, however, about 480 birds grace the wide skies over locations mainly along the Sea of Japan, such as Sado Island.

Their revival began with a pair China gifted to Japan.

In 1998, Chinese President Jiang Zemin promised to offer the birds, named You You and Yang Yang, as a symbol of bilateral friendship when he became China’s first head of state to visit Japan.

He made the promise during a meeting with Emperor Akihito and Empress Michiko (currently the emperor emeritus and empress emerita), telling Akihito, “I understand that Your Majesty is an outstanding avian expert.”

Having retired from the presidency in 2003, he was rarely seen in public in recent years.

I vividly remember the harsh tone of Jiang’s speech at a banquet held at the Imperial Palace in the evening of the day he announced the gift of the birds.

He bluntly stated to the effect that Japan’s militarism had taken the wrong path of overseas aggression and expansion.

In retrospect, that scene foreshadowed the ensuing years of strained relations between the two countries.

Leading the nation of 1.3 billion over more than a decade, Jiang fanned nationalism at home while putting its economy on track for development.

Today, China has grown into the world’s second-largest economic power. With President Xi Jinping set on consolidating his power, the nation is steadily pursuing a hard-line policy.

I cannot imagine anyone wanting two neighboring nations to continue antagonizing each other. I want to believe that Jiang’s wish was for that pair of toki to represent permanence.