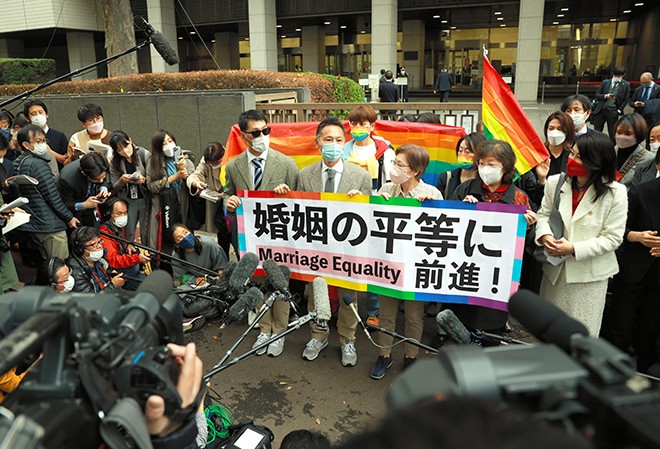 Plaintiffs and supporters in front of the Tokyo District Court on Nov. 30 (Tetsuro Takehana)

Gay couples fighting for the right to marry are expressing disappointment with the latest Tokyo court ruling that upheld the ban on gay marriage as constitutional.

But some at the same time insist progress is slowly being made and are hailing it as a small step in the right direction.

The Tokyo District Court ruled on Nov. 30 that Japan’s ban on same-sex marriages is constitutional, but the plaintiffs said it stands apart from the last two rulings on gay marriage since it said the legal system is in a “state of unconstitutionality” for failing to recognize same-sex couples as families.

“The fact that the court demonstrated a ‘state of unconstitutionality’ alone is a great result,” said Takako Uesugi, a lawyer representing the plaintiffs.

Haru Ono, one of the eight plaintiffs who raised three children with her same-sex partner, said that she was happy the court “clearly stated there are same-sex households raising children.”

The court had noted some gay couples raise children, something that helps “stabilize the whole of society,” and it is problematic that these families are not covered by the legal system.

“Preparing a different system is unnatural and discriminatory,” Ono said.

The plaintiffs are expected to appeal the court ruling.

Others have filed similar lawsuits in four other district courts: Sapporo, Nagoya, Osaka and Fukuoka.

A plaintiff in his 30s in the Nagoya case said he appreciated that the Tokyo decision deemed that the legal system is in a “state of unconstitutionality.” But he said he was “disappointed” that the court said marriage defined by the Constitution is strictly for couples of the opposite sex and excludes same-sex marriage.

Machi Sakata, 43, a resident of Kyoto and one of the plaintiffs from the Osaka case, said the Tokyo decision was a positive step and appreciated that the court considered the welfare of children of same-sex couples.

But Kozo, 40, a plaintiff of the Fukuoka case, said the Tokyo ruling made him feel that gay couples are constrained within a different legal framework from everyone else.

A plaintiff from the Sapporo case, who is in the middle of an appeal trial, said he does not know how to process the Tokyo ruling yet.

“Honestly, I don’t know if I should be happy about it,” he said. “Why couldn’t the (Tokyo) court find it unconstitutional? I’m confused.”

While the Constitution's Article 14 sets out that everyone is equal under the law, the court said that Clause 1 of Article 24, which guarantees the freedom of marriage, only assumes opposite-sex marriages. That means the ban on same-sex marriages is “rationally based” and does not violate Article 14, the court reasoned.

But it also pointed to Clause 2 of Article 24, which defines the parameters for creating laws governing marriage and family life, and concluded the legal system is in a “state of unconstitutionality.”

The court said the nature of marriage is to “give legal protection and social approval to intimate people living together.”

The court reasoned that making it illegal for gay people to ever form a family with their partner simply because they are of the same sex poses “a threat” to them.

This is the second court this year to rule in favor of the ban on gay marriage, following the Osaka District Court in June. But the Osaka ruling focused on marriage as something that “gives protection to a relationship that produces offspring by natural reproduction.”

The Osaka court stated the issue “has not been discussed well enough,” and ruled the ban does not violate Clause 2 of Article 24 in the Constitution.

The Tokyo court meanwhile pointed out that a partnership system for gay couples, which has become available in some municipalities, “will possibly coexist with traditional values” and that “establishing such a system poses no problem” so long as it is different from marriage.