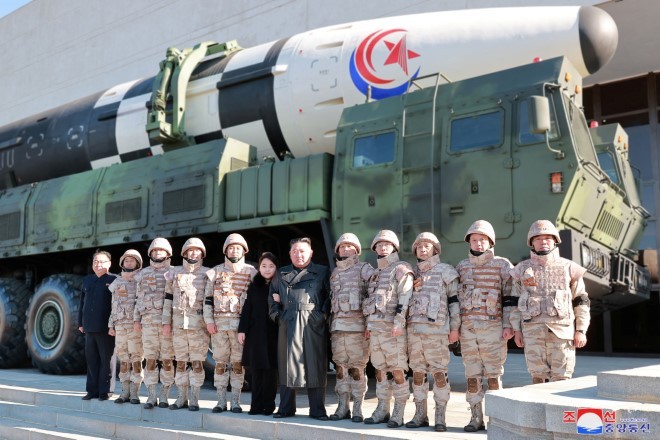 North Korean leader Kim Jong Un and his daughter attend a photo session with the scientists, engineers, military officials and others involved in the test-fire of the country's new Hwasong-17 intercontinental ballistic missile (ICBM) in this undated photo released on November 27, 2022 by North Korea's Korean Central News Agency (KCNA). (KCNA via REUTERS)

“We have a new set of sanctions measures coming forward as we speak,” he told a conference in Seoul organized by the U.S.-based Center for Strategic and International Studies and the South Korean JoongAng media group.

Sullivan, who spoke via live video link, did not elaborate but said Washington was committed to using pressure and diplomacy to entice North Korea into giving up its nuclear arsenal.

The “North Star” of U.S. Joe Biden’s North Korea policy is the denuclearization of the Korean peninsula, and it remains steadfast in pursuing that goal while being flexible in working with partners on how to achieve it, he said.

He pointed to increased cooperation between the United States, South Korea, and Japan, which have increased joint military drills. The United States is also working on a more “visible” regional presence of its strategic assets, Sullivan said, referring to major weapons such as aircraft carriers and long-range bombers.

North Korea has said denuclearization is off the table and accused the United States and its allies of pursing “hostile” policies, including sanctions, that have left it no choice but to expand its military.

Sullivan said Washington had no ill intent toward North Korea and is open to talks without preconditions.

“Pyongyang has rejected this sincere outreach,” he said.

The last round of U.S. sanctions in October targeted two Singapore-registered companies and a Marshall Islands-registered firm that Washington said support Pyongyang’s weapons programs and its military.

Decades of U.S.-led sanctions have not halted North Korea’s increasingly sophisticated missile and nuclear weapon programs, and China and Russia have blocked recent efforts to impose more United Nations sanctions, saying they should instead be eased to jumpstart talks and avoid humanitarian harm.

Sullivan said the administration has no illusions about the challenges, but that the United States remained committed to holding North Korea accountable.