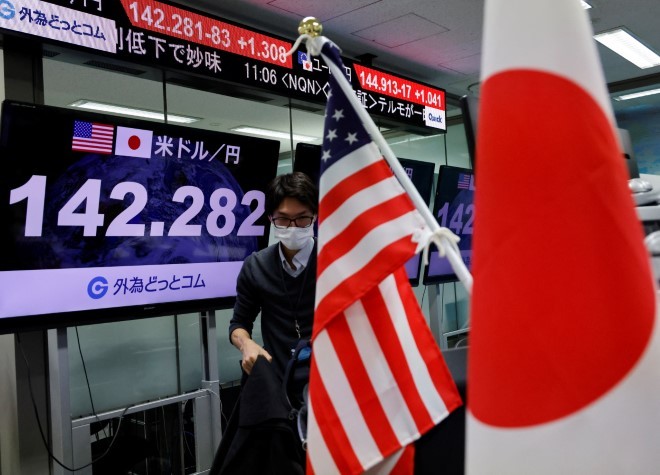 An employee of the foreign exchange trading company Gaitame.com walks in front of monitors showing the Japanese yen exchange rate against the U.S. dollar in its dealing room in Tokyo, November 11, 2022. (REUTERS)

The dollar tumbled to a three-month low versus the yen on Thursday as traders keyed on comments by Federal Reserve Chair Jerome Powell that interest rate hikes could be scaled back “as soon as December.”

The dollar-yen pair is extremely sensitive to changes in long-term U.S. yields, which slid to a nearly two-month low of 3.6 percent overnight after Powell said at the Brookings Institution in Washington that “slowing down at this point is a good way to balance the risks.” He added however that controlling inflation “will require holding policy at a restrictive level for some time.”

“Market participants appear to have interpreted Powell’s speech as more dovish than hawkish,” pushing down U.S. yields and the dollar, Kim Mundy, a strategist at Commonwealth Bank of Australia, wrote in a client note.

“The reaction supports the markets’ apparent ‘glass half full’ approach to the economic outlook at the moment.”

Markets are currently pricing 91 percent odds that the Fed slows to a 50 basis point rate increase on Dec. 14, and just 9 percent probability of another 75 basis point bump.

In November, the dollar dropped 7.15 percent versus the yen, its worst month in 14 years, as investors positioned for a Fed pivot.

The dollar index--which measures the currency against six major peers including the yen and euro--extended Wednesday’s more than 1 percent drop into Thursday, dipping as low as 105.69. It tumbled 5.2 percent in November, its worst monthly showing since September 2010.

A European survey on Wednesday showed that euro zone inflation eased far more than expected in November, raising hopes that sky-high price growth is now past its peak and bolstering, if not outright sealing the case for a slowdown in European Central Bank rate hikes next month.

The Aussie and kiwi have also been buoyed by signs the Chinese government will relent on its strangling zero COVID policy, following the announcement of an easing of curbs in places including Guangzhou and Zhengzhou, the site of a Foxconn iPhone factory.