Rallies held in Tokyo to support ‘zero-corona’ protests in China 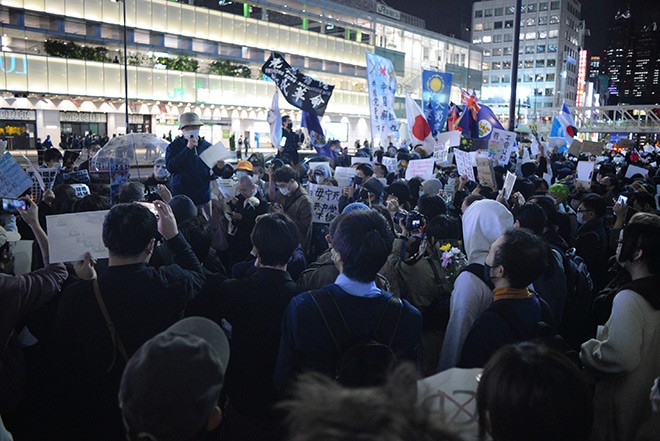 Protesters of China’s "zero-corona" policy fill the sidewalk at the south exit of JR Shinjuku Station in Tokyo on Nov. 30. (Sotaro Hata)

Many protesters who appeared to hail from China held a rally in Tokyo on Nov. 30 to show support for widespread protests in China regarding the nation’s strict “zero-corona” policy.

“I want to convey my support to the people protesting in China, where it is much more dangerous to raise their voices than in Japan,” said a 19-year-old university student from China who participated in the rally.

At one point, participants filled the sidewalk in front of the south exit of JR Shinjuku Station.

The protesters offered silent prayers for victims of a deadly apartment building fire in Urumqi, the capital of the Xinjiang Uighur Autonomous Region in China’s far west, on Nov. 24.

The incident triggered large-scale protests in Beijing, Shanghai and other parts of China mainly over the last weekend.

Many protesters believe that novel coronavirus lockdown barricades may have delayed the arrival of fire trucks, resulting in 10 deaths.

In a rare development in China, where criticism of the regime is strictly regulated, some protesters criticized the leadership of President Xi Jinping.

Chinese protesters have turned to blank sheets of white paper to express their anger against the country’s lack of freedom of speech.

A similar scene was seen at the rally in Tokyo.

Some called for Xi to step down.

“Learning about the fire in Urumqi, many Chinese people thought they might be the next victims (of the zero-corona policy),” said a 28-year-old company employee.

A rally was also held on the evening of Nov. 27 in Tokyo.

An organizer in his 20s said there were originally 20 participants, but the number quickly jumped to more than 100.

“Extreme coronavirus measures have brought about many tragedies,” he said. “The fire in Urumqi fueled more anger and sadness.”