Cinderella or choker? Japan braces for match against Spain 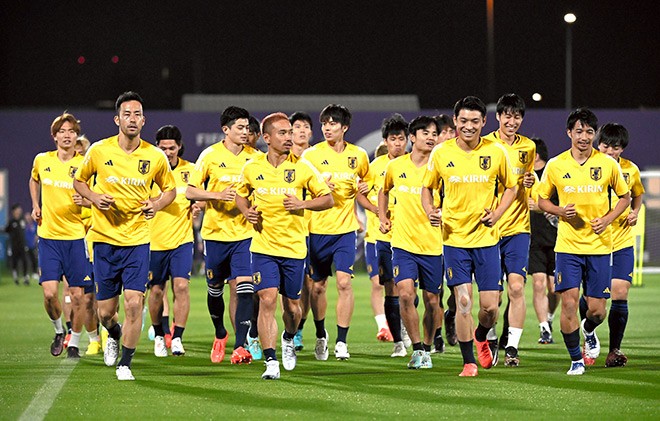 The Japan team trains in Doha, Qatar, on Nov. 29, ahead of the match against Spain. (Tatsuo Kanai)

DOHA, Qatar—Japan heads into the final match of Group E here with more at stake than just a berth in the knockout stage of the World Cup.

An upset win against Spain would not only send Samurai Blue to the round of 16, but a victory would also restore the team’s reputation and resume its “Cinderella” storyline.

A loss to Spain would send Japan packing, and talk among soccer pundits could remain focused on Japan’s blown opportunity against underdogs Costa Rica in the second game.

The match against Spain will start at 4 a.m. on Dec. 2 Japan time.

“People might accept a defeat (against Spain) if we pour everything we can into the game, but they won’t if we just perform like we did against Costa Rica,” Kaoru Mitoma, a midfielder for Brighton & Hove Albion, said at a news conference in Doha on Nov. 30. “I want us to play an energetic game like we did in the Germany match.”

Japan’s surprise 2-1 victory over four-time champion Germany in their World Cup opener put Samurai Blue in a comfortable position to move on to the next round.

But Japan, ranked 24th in the world, looked sluggish against the staunch defense of Costa Rica and fell 0-1 to the Central American team, ranked 31st in the world.

That disappointment forced Japan into a “can’t-lose” game against Spain, a former world champion ranked No. 7 in the world.

Japan could still advance with a draw against Spain, but that would depend on the result of the Germany-Costa Rica match, which will start at same time as the Japan-Spain game.

Part of the Japanese team’s training session was open to the media on Nov. 30.

Twenty-four players were on the pitch, but Wataru Endo, a midfielder for VfB Stuttgart who injured his right knee, and Hiroki Sakai, a defender for the Urawa Red Diamonds who has a sore left thigh, were training in a separate workout program.

Shuichi Gonda, a goalkeeper for Shimizu S-Pulse, perhaps knows best about the ups and downs of Japan’s experience so far at the World Cup.

His strong play against Germany earned him the “Player of the Match” accolade.

Reflecting on the loss to Costa Rica, Gonda told the news conference on Nov. 30, “I could have stopped that goal if I had prepared for it.”

He continued: “I sometimes feel that I could have done something. But the coach told me, ‘It’s the future that you can change, not the past.’ I would like to cherish this advice.”

As for the match against Spain, Gonda said: “Whatever happens, I will show up. Neither getting praised and becoming overconfident nor being criticized and losing confidence is good.”

Japan coach Hajime Moriyasu said at the news conference: “We are praised if we win and are criticized if we lose. A sudden change in standing is common in the world where you either win or lose. I am just delighted that people have taken an interest in soccer and are debating it.”