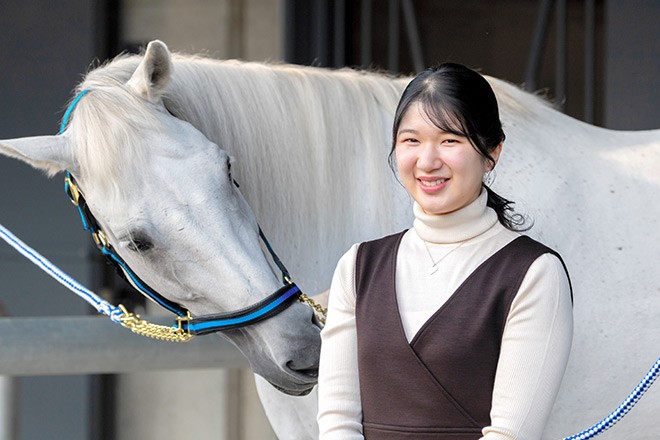 Princess Aiko, who turns 21 on Dec. 1, with a horse at a stable in the Imperial Palace (Provided by the Imperial Household Agency)

Princess Aiko, the daughter and only child of Emperor Naruhito and Empress Masako, turned 21 on Dec. 1.

She has been performing official duties as an adult member of the imperial family over the last year.

After attending rituals to mark her passage into adulthood last year, Aiko took part in the New Year’s celebration ceremony at the Imperial Palace in January and imperial rituals for the first time as an adult member, according to the Imperial Household Agency.

Aiko is currently a junior at the Faculty of Letters at Gakushuin University in Tokyo, majoring in Japanese language and literature.

She has taken classes such as Japanese language history and Japanese history.

She continues to take classes online due to the novel coronavirus pandemic in Japan, and she works on assignments and reports daily.

Aiko has studied various classical works such as “Genji Monogatari” (The Tale of Genji) and “Shin Kokin Wakashu” (New Collection of Poems Ancient and Modern), as well as “Oku no Hoshomichi” (The Narrow Road to the Deep North) and other literature from the Edo Period (1603-1867).

In November, Aiko attended a performance of "gagaku" imperial court music by the music department in the Imperial Household Agency for the first time.

Before the concert, she reviewed notes from university classes on gagaku.

The agency said she was delighted to experience the traditional performing arts of the imperial court in person.

After the imperial couple returned from their visits to Britain in September and to Okinawa in October, Aiko heard stories from them about the places, according to the agency.

At the family’s residence at the Imperial Palace, Aiko has grown tomatoes, cucumbers, paprika, ginger and other vegetables, which she harvested with her parents and Imperial Household Agency staff.

In her spare time, Aiko is involved in activities such as going for walks, playing tennis, badminton and volleyball with her parents and staff.

In November, she observed a total lunar eclipse coinciding with Uranus being occulted by the moon in the garden of the residence with her parents.

Aiko raised silkworms again this year, a tradition of the Japanese imperial family.

She also continues to care for her dog Yuri and her cats, Mii and Seven, the agency said.